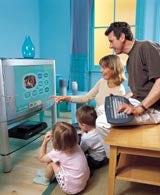 Advertisers, broadcasters and media agencies are only just catching their breath after the many changes that hit the television industry last year, the most notable being the merger of Carlton Communications and Granada to form one ITV.

When they attend Marketing Week’s annual TV conference in London next week, they will be asking “what next?” for TV. The industry will be questioning traditional thinking in a bid to find out how to make the most of TV in this ever-changing multichannel environment.

Issues such as public service broadcasting, the future ownership of broadcasters, methods of trading, consolidation of sales houses, BBC Charter renewal, the growth in multichannel viewing, creativity in advertising, and the effectiveness of television as a medium compared to other forms of media will all be on the agenda.

Keynote speaker David Elstein, former chief executive of Five, is due to kick-start TV 2004: The Challenge next Tuesday with his views on what will happen to TV over the next five years. Elstein, who is doubtful that the Government will be able to achieve its official target for analogue switch-off by 2010, is likely to touch on the subject as well as the review of the BBC’s Charter and the future of the licence fee, which he would like to see phased out and, eventually, abolished.

The role of the BBC in a digital environment is also an issue that BBC director of marketing, communications and audiences Andy Duncan will tackle on the second day of the conference. He says the digital world should not been seen as a threat: “Embracing the future as being digital in itself presents opportunities.”

He cites the partnership behind Freeview with BSkyB as one of those opportunities and predicts that projects with other parties will follow as the BBC considers how to make its content accessible on emerging platforms such as broadband and 3G.

Insight into the way people watch multichannel TV will also become more and more important in a digital world and will help advertisers to come up with ideas of how to get the best out of the medium.

John Hardie, senior vice- president of branded television for Walt Disney Television International, will unveil new behavioural research showing how people interact with the television in their home on the first day of the conference. He will discuss how personal video recorders and electronic programme guides will affect viewing and advertising effectiveness.

Nigel Foote, director of Starcom UK Group’s Strategic Intelligence Unit, will also produce research on Tuesday that “re-evaluates the power of TV by looking at levels of engagement rather than just exposure”.

He will be followed by Frank Harrison, head of research at Zenith Optimedia, who will unveil research on media neutrality, which puts TV in the context of other media and may possibly cause advertisers to reappraise TV’s share of advertising spend.

Further research on television’s role to stimulate marketing by word of mouth will be presented by David Fletcher, head of Media-edge:CIA’s MediaLab. It shows that although those people who are opinion-formers differ by category, all are more likely to think TV ads are interesting to talk about. However, like other viewers, they will fast-forward through the ads if watching recorded TV.

Last year’s conference in Bath revealed concerns about a growing lack of creativity in TV advertising. Advertisers were blamed by broadcasters for dull ads that turned off viewers and caused them to switch channels or undertake other activities during commercial breaks.

But that accusation cannot be levelled at The Number’s campaign featuring the 118 118 runners and the much-repeated line “Got your number”, which has captured the public’s imagination. Below-the-line activity played a key role in supporting the heavy use of TV advertising, says The Number’s marketing director Alexandra Lewis, who is due to speak on the first day of the conference: “The more this repetition occurs outside the domain of paid advertising, the more powerfully the ideas spread.”

Bartle Bogle Hegarty chief executive Nigel Bogle will be handing out tips on how to inject creativity into TV advertising in a session scheduled for earlier in the day.

Creative thinking is one of the factors that is also behind Golden Wonder’s decision to sign up its Nik Naks brand to sponsor The Osbournes on MTV and Channel 4. Golden Wonder marketing director Rob Morgan will show how the Nik Naks brand overcame the shortcomings of its original &£100,000 budget – ruling out a major advertising campaign on broadcast media – and has now managed to drive up daily sales from 300,000 to 450,000 packs in the two years of its sponsorship activities.

Other advertisers are also experimenting with TV in new ways. Members of Zip Television’s Consortium4TV, which includes Procter &amp; Gamble, BT and COI Communications, will outline how viewers can interact with their TV ads by jumping to the brand’s own channel.

It will also unveil initial research findings on how viewers respond to interactive advertising. In June, consortium member Honda is expected to be the first member to go live with a new interactive ad; one year after its award-winning Cog campaign.

Creativity will also be an issue that Toyota commercial director Paul Philpott will touch on when he opens the second day of the conference. He is expected to repeat other concerns that were aired at last year’s conference in Bath and call for a unified approach to marketing TV, proof of the medium’s effectiveness and a change in regulation to allow brands greater leeway in innovation on TV.

With this in mind and in order to rebut criticism from advertisers and agencies that TV does not do enough to promote itself, the main broadcasters have got together to commission research on how best to sell the power of TV going forward. The results of this are due to be revealed during the last session of the conference, when the sales directors from the main broadcasters take to the stage.

BSkyB sales director Mark Chippendale and IDS managing director Mark Howe will also be unveiling the latest results from the SFX research project that aims to identify the effect TV advertising has on sales, as opposed to other media. Howe says: “It’s all really encouraging stuff. It demonstrates that TV remains a very effective medium and multichannel is even more effective than it was before.”

The rest of the day will be devoted to looking at the future of TV. Channel 4 director of television Kevin Lygo will attempt to identify “the next big thing” in programming; BT head of broadcast media Steve Huddleston will outline the effect of multichannel’s growth and new technologies such as 3G and WAP TV; and ITV sales managing director Graham Duff and ITV director of marketing Jim Hytner will be talking about the positioning of ITV for a new era.

A panel of industry experts – including Billetts chairman John Billett and Kimberly-Clark media director for Europe Oliver Cleaver – will discuss the future of the sales environment, touching on the ITV merger and possible further consolidation of sales between Channel 4 and Five, as well as the increasingly influential role of auditors.

By the end of the jam-packed two-day conference, advertisers, media buyers and broadcasters should be well on their way towards questioning traditional thinking as they prepare for the digital age.