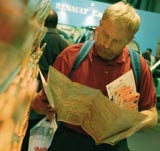 The best show in the world will struggle to attract visitors if it is not properly marketed, so organisers spend large sums of money on communications – and on teaching exhibitors to publicise their own attendance.

True believers in exhibitions put their faith in the trinity of sales, operations and marketing. “Without sales, there is no revenue; without operations, there is no venue management; and without marketing, there are no visitors,” says Will Broadfoot, head of marketing at Brintex, which organises the London International Wine and Spirits Fair among others. “If any one of these factors is not functioning at full capacity, the knock-on impact will often undermine the other two for the future. In the case of marketing, if a poor or underfunded campaign leads to a dramatic drop in the numbers or the quality of visitors, or both, future stand sales will suffer. Marketing is fundamental to the success of an event.”

But what proportion of an overall exhibition budget should be devoted to marketing? Several organisers are willing to name a figure: “At 25 to 30 per cent, marketing is the second-highest expenditure after venue rent and rates,” says Broadfoot.

“About 30 per cent of cost is spent on marketing,” says Brand Events marketing director Nicola Meadley.

On the venue side, Helen Blake, marketing communications manager at the Queen Elizabeth II Conference Centre in London, answers: “Organisers should spend about 35 per cent of their budget on marketing.”

Of course, this is only a general figure – the proportion of overall exhibition outlay spent on marketing can vary depending on the sector.

Tranfield says: “In some industries, there are just a few relevant magazines, whereas in others there are 30 or more. This automatically affects the size of the ad spend and therefore the budget needed to reach the market.”

Broadfoot adds: “We organise an event in Cannes, to which all visitors are hand-picked and fully accommodated during their visit. The marketing is all done person to person on the telephone, so as a percentage of the overall budget it is very small.”

Other factors that can affect an event’s marketing budget, according to Broadfoot, are how established an event is, what competition it faces and how strong a brand it boasts. But he warns against complacency: “The London International Wine and Spirits Fair, for instance, has a very loyal visitor (and exhibitor) base and the brand is respected and understood throughout the wine and spirits industry. One might assume that the marketing message needs only to consist of dates and venue to secure thousands of visitors, but research has shown that some 40 per cent of visitors are new to their job or to the industry, so it would be a major error to cut back on marketing spend and risk losing market share.” For long-running exhibitions, it is also necessary to publicise new features to give visitors a reason to keep coming back.

What’s the way the money goes?

Having established that a sizeable chunk of an exhibition’s finances is generally spent on marketing the event, how are organisers are spending it? The answer is an incredibly broad range of media and marketing techniques, the specifics of which differ between trade and consumer sectors.

Michael Enser, marketing manager for the London and Southampton Boat Shows, explains: “A consumer event requires a less-targeted campaign, taking in local and national press, radio, TV and a whole range of other media. By contrast, a trade show doesn’t have as many touch-points beyond its interest group. One could argue that a business-to-business campaign suffers less wastage than a consumer communication.”

He continues: “A business message requires a different tone of voice to a consumer message. Trade shows need to communicate business benefits, while a consumer show needs to convey that it is offering a better experience than another kind of day out.”

To whom are you talking?

The most common forms of trade exhibition marketing are direct mail, trade-press advertising and, increasingly, e-marketing. However, before this can be carried out, in-depth research to identify the target market is essential.

According to Tranfield, Incentive World has in the past suffered from a generic, untargeted marketing approach, more akin to that used in the consumer sector.

She says: “Visitors were confused about how the show was relevant to them. Through thorough research, it became clear there was uncertainty in the market. This information drove a targeted campaign for 2003, promoting reasons to attend and the specific proposition the show offered to people in specific jobs.”

An increasingly powerful form of marketing for both trade and consumer shows is the website. An online presence giving full details of the event, including any special features and even a virtual tour, can mean an accompanying advertising campaign can provide less information, using smaller, more frequent ads. What is more, visitors can often register online and even contact other attendees, increasing the networking potential of the event and, as a result, the likelihood that those who have registered will actually attend.

Blake stresses the importance of making sure the website works: “I believe many organisers are let down by their online marketing. Enticing visitors to register for an exhibition is usually the greatest challenge, but on numerous occasions I have decided to register online to save time and effort. But, after completing all the fields, I am usually greeted with: ‘Our system is temporarily offline, please try later,’ by which time I have moved on to my next task.”

“Contra” deals can be a useful way of expanding a show’s marketing reach without increasing the budget. Enser gives an example: “We worked with radio station Wave 105FM at the Southampton Boat Show last year. We branded the show’s white-water rapids ride the Wave 105 White Water Experience and played the station’s music across it. In return, we benefited from excellent airtime, namechecks, promotions and competitions on the station.”

Many exhibition organisers use external agencies such as direct marketing houses, list-brokers, research agencies, IT companies and Web developers, to help with marketing an event. In addition, they tap into the resources of relevant trade associations, which are often a good source of knowledge, direction and industry data. However, the sheer number of people involved in the organisation of an event demands a high level of expertise and communications skills in people, which makes PR companies the most popular – and arguably the most useful – external marketing resource used by organisers. A good PR agency can prove indispensable, particularly in talking to exhibitors, making sure they are up to speed on all aspects of the show, such as any special features of which they may wish to take advantage. They are also often crucial in guiding exhibitors’ own marketing efforts, which can be vital to a successful show – and a key factor in them returning to exhibit the following year.

Jill Hawkins, director of PR company Friday’s Media Group, says: “International Confex, organised by CMP, contracts our services throughout the year to ensure constant coverage for the show and support for exhibitors. We have been working with Confex for three years now and we really are part of the team. Also, as a specialist agency, we know this market extremely well, so we don’t have to waste time (and therefore our client’s money) researching the relevant titles and journalists.

“I feel that exhibition organisers get more value for money if they build relationships with their suppliers and only use those with good knowledge of their industry,” she adds.

Persuading exhibitors to market themselves isn’t easy, but PR companies can help by producing marketing guides. Hawkins says: “The guide we produce for Confex contains details and dates of the advertising and editorial previews that we have scheduled, so exhibitors can easily piggyback our campaign. It also contains information on how exhibitors can get a bigger presence on the website, obtain free entry in the show catalogue, invite VIPs to the show and make the best use of the on-site press office. It even shows them how to put together a press release. Exhibitors don’t have to spend a fortune to get the best out of a show, but they do have to be organised. Throwing money at a pre-publicity campaign isn’t going to help if all of the show previews have already been printed.”

Although exhibitors are often seen from a sales perspective, they are a key element of a show’s marketing strategy. Encouraging them to get involved in the marketing of a show benefits both them and the event, and keeping the communication channels open and looking after exhibitors at the show builds their confidence and satisfaction levels – supporting the exhibition’s future stand sales.