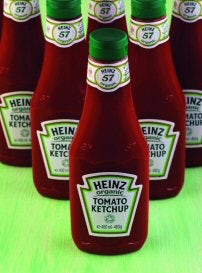 Heinz Tomato Ketchup used to be sold in 68 different bottles across the world. That number is now down to seven.

The advantages of such a move are obvious: economies of scale from having fewer production lines; easier product management and quality control; and greater brand recognition across the globe.

But creating packaging that has global appeal and is recognisable and desirable in vastly diverse countries is no mean feat. Retail environments vary enormously across the world and cultures have different relationships with products, images and colours.

“In the US, land is cheap and stores are huge,” says Piers Guilar, planning director at Jones Knowles Ritchie. “Packs are pushy, logos are big and bold and the products take up big blocks on the shelf. Packs tend to carry lots of product information too.

“In the UK, there is no big blocking and packs tend to be more sophisticated. In France, it’s all about appetite and gorgeous pictures of food – even a Mars bar has a product shot on the pack. Some countries are very patriotic: in Switzerland you see lots of packs that carry the Swiss flag or pictures of mountains.”

Social factors
Guilar says it is also important to consider different cuisines. Rice, for example, is used and presented very differently in Asia, the US and Europe. Colour is important too. “In China they don’t like black – though they do like Guinness,” he says. Red has sexual connotations in Turkey but is loved in Spain. Bling goes down well in Russia and gold tends to be popular in the Middle East.

And it gets more complicated with the seasons, explains David Beard, creative director of Brandhouse. Just as gold, red and green appear on all sorts of packs in the UK around Christmas, regardless of the brand, blue tends to be used more in Muslim countries around Ramadan.

Purple is seen as funereal in Thailand, as Enterprise IG found out to its cost when it launched an ice cream pack that featured the colour. “It was the colour of the ingredient so we thought it would work, but it failed,” explains Pete Hollingsworth, head of product branding at the company.

The imagery used on packaging varies too, he adds. “You have to be sensitive about the way you use women and other models. The people on packs in the Middle East tend to be covered up, while in places such as Thailand you can explore the body beautiful and be more adventurous.”

Hollingsworth says that there are big differences between markets over how literal or oblique the communication of the brand benefits can be. In some markets, especially where literacy levels are low, shampoo bottles need to carry a picture of someone with shiny hair, whereas in Europe this now looks old-fashioned. We prefer type or brand icons.

What many brands are striving for is a globally recognised symbol. We know the Coca-Cola logo even if we see it in Japanese or Farsi. And the Heinz keystone works in the same way.

Brand DNA
Some sectors are easier than others when it comes to creating a global brand. Airlines obviously have a single image, since planes can’t be subjected to a quick paint job before they land. Banks, energy companies and drinks brands also tend to be fairly consistent.

It’s all about brand DNA, believes Cliff Owen, creative director at design company Watt Gilchrist, which serves 23 countries. “A multinational brand must have enough DNA on the pack to ensure broad consistency across worldwide markets,” says Owen. “Coca-Cola, for example, is able to retain 90% of its packaging identity across all markets. For most brands, however, that figure drops to 50% or 70 % to allow for local market language expression, typefaces and so on.

“US brands tend to want to steamroller their brands worldwide, but even they find they need to be sensitive to the local market and adapt their packaging and designs,” continues Owen. “One major US multiple tried rolling out products in the UK and Germany with US designs and their products •flopped due to what was perceived as outdated packaging.

“Brands must be sensitive to local market conditions and understand what is considered contemporary. That must then be combined with enough brand DNA to allow for easy international identification.” Brands may have international colours but different names, or they may keep the name consistent but have to use different colours because of national sensitivities. Some territories think a pack is incomplete until it has a flash in the corner, so designers will add a stamp for that country.

“Nirvana would be to have no word at all on the pack,” asserts Beard at Brandhouse, who has worked for Unilever on laundry products such as Persil, which is known as Skip in Europe and Omo in America. “They all have the dancing star symbol that anyone could know and articulate. The name doesn’t have to be the most important thing on the pack.”

For Persil, the brand’s DNA is articulated in the Dirt is Good campaign, which is being rolled out in every market. “The idea translates globally that being a good, modern parent is about allowing exploration,” explains Beard. “Instead of symbolising a chore, dirt is presented as evidence of good experiences.”

Another Unilever product, men’s deodorant Lynx, known as Axe in most markets, also relies on the same brand story the world over: unbeatable pulling power. Likewise, Unilever is rolling out Dove’s campaign for real beauty as it launches into new territories.

Translating the story
Other products may have a similar look and name across markets, but may use different communications because the brand story doesn’t translate easily. Guinness, for example, has an iconic image the world over, but in Africa its advertising features a black James Bond character demonstrating strength and power.

Procter & Gamble’s Ariel is one of the UK’s market leaders so can afford to be experimental with its current “turn to 30°” energy-saving campaign. In markets such as Latin America, it is sold on the principles of performance and power and the packaging retains its interlocking rings of spinning atoms, a look that we would consider brash and retro – “like a cartoon washing-powder box”, says Derek Johnston, creative director of Landor.

For a new launch, such as Dove’s international expansion, it is relatively straightforward to introduce a brand and its values to virgin markets. For older products, the process is trickier and might involve migrating the brand through several landing platforms. According to Beard, Persil’s move to the Dirt is Good idea took one step in the UK, but will probably involve two or three steps in European or American markets.

Marathon’s migration to Snickers took several stages to shake off its heritage: first the pack colour changed from red to brown, then the name appeared as Marathon (Snickers) for a while before becoming plain Snickers.

Johnston at Landor has recently been working on converging P&G’s Bold 2in1 with French product Dash 2en1. The look has been harmonised and the product range is similar, but the detergents are labelled in different ways, emphasising ingredients in the UK (lavender and camomile, crushed silk and jasmine, apple blossom and lime zest) and results in France (freshness, softness, energy).

Enterprise IG has been doing a similar exercise for Unilever’s Sunsilk (aka Elidor, Hazeline, Seda and Sedal) since 1994. “It now has the same pack, format and logo as well as the same end benefits and ingredients,” says Hollingsworth. “We just use different girls, for cultural reasons. You can use the same models for work across India, Thailand and Indonesia, for example. And Brazilian models can have global appeal.” In many markets, hair products for black hair are the best sellers, but in Europe and Australia Sunsilk’s ranges for blondes, brunettes and reds are going down well.

Addressing different values
Some markets are simply not ready or willing to fully embrace Western cultural values and have to be treated on their own merits. Design company Loewy recently worked on pet food brand Darling (owned by Nestlé Purina PetCare) in Eastern Europe, where pet owners are much less indulgent than those in Western Europe.

Loewy managing director Jonathan Shaw explains: “The packaging needed to communicate that pet food is as good as home cooked and far better than scraps, so the packaging carries a kitchen scene in the background.”

There are also pricing issues, he adds: “You are persuading someone in Eastern Europe to spend a far greater percentage of their income on a product such as pet food compared to the average Western consumer so communications need to take this into account.”

Culture, retail practices, disposable income and visual codes all have a role to play in determining how products are presented in different markets, concludes Andrew Eyles, managing director at design company Blue Marlin, and all may have an impact on both the visual and verbal elements of a pack.

“When adapting to different cultures it is important to ensure your brand remains recognisable,” says Eyles. “The strength of a multinational brand is how it appeals to local markets while harmonising with others. “Brands can thrive globally provided there is understanding of the functional task and emotional benefit to each country’s culture.”

Transport for London is looking for a new sponsor for the London Underground busking scheme to replace Carling.

The timing of Fru Hazlitt’s abrupt resignation from her role as chief executive of Virgin Radio, the Scottish Media Group-owned national commercial station, may have surprised the radio industry but few observers doubt what her reasons may be for leaving after just 18 months. When Hazlitt arrived at Virgin Radio in August 2005, the station […]

Nick Button, Capital Radio’s new marketing director, acknowledges that his role comes with a certain amount of pressure but, three-and-a-half weeks into the job, he claims not to be feeling it. Button joins GCap Media’s flagship London station at a crucial time. In the Rajar results for the third quarter of 2006, the station recorded […]