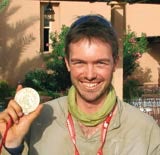 The Diary is happy to report that “marathon man” Dom Robertson is back in Blighty after completing the Marathon des Sables – a 243km (about 151 miles in old money) run across the Sahara (MW April 14).

The Diary’s request for him to do the run in a gorilla suit sadly fell on deaf ears, but just to put Dom’s feat into perspective, the run is the equivalent of a London Marathon a day for five days in temperatures in excess of 50 degrees each day. Dom claims to have lost six stone during the run, but the Diary suspects he’s just boasting.

Dom, who raised &£35,000 for two charities by completing the run, says: “That was an experience I’ll never forget, but also one that I won’t want to re-live.”

He’s also set the standard for the rest of the marketing world to beat. Basically, unless you’re walking to the South Pole in nothing but a pair of spray-on Speedos, you’re going to look a softie by comparison.