Russia. A country with a bad reputation as a place to do business (think Royal Dutch Shell and the Sakhalin project), with the spectres of corruption, government interference and a vigorous black market meaning that Russia’s opportunities are sometimes overlooked. But for those who make the effort to understand it, Russia can be a key market. It’s a country in rapid transition.

Russia’s major asset is natural wealth: it boasts 38% of the world’s natural resources. This wealth was squandered in the past, but Russia’s economic potential is huge – and beginning to be realised. Pivotal in recent Russian history was the economic crash of 1998, when the rouble was devalued and the country’s debt restructured. Thanks in part to rising oil prices, recovery from this low point has been steady, though the crisis affected Russian attitudes to local and foreign brands. Since 1998, Russia has enjoyed robust growth and foreign debt has fallen from 64% of gross domestic product (GDP) to 10%. Foreign investments doubled in 2005, and real dollar income is at an all-time high. With income tax low (13%) Russia is becoming more attractive for businesses.

Set against this is the problem of changing demographics. Russia’s population is 143 million (small next to the billion-strong emerging markets of China or India) and around 30% live outside cities, spread thinly across a vast territory. The death rate is twice the birth rate and in the next 50 years the population is projected to drop to 100 million or below (UN estimates). Yet Russian demographics have a unique twist: a massive gender life expectancy gap where men have a life expectancy of 59 years compared to 72 for women.

Russia is also burdened with a reputation for volatility: 80% of exports are natural resources, leaving the economy vulnerable to price swings. Corruption is also rife – the shadow economy accounts for 30% of GDP, legal protection of ownership is shaky and businesses find themselves forced to deal regularly with multiple levels of government just to function.

But this is a market the size of Germany and one enjoying a rapid consumer boom. Real disposable income is increasing faster than GDP and sales of consumer appliances and imported cars are soaring. The mobile phone market is the best example of rapid change: 3% ownership in 2000 compared to 50% today.

Consumer attitudes are changing too – people claiming that price is the most important factor in a purchase has fallen from 55% to 42% in five years, reflecting an aspirational mindset. Discounts and special offers are rapidly growing in popularity as they become a key weapon for Russian marketers, suggesting that aspiration is tempered by a degree of realism. As the boom continues, marketers are paying more attention. Adspend is growing at five-times the rate of GDP, total consumer credit has grown by $40bn (21.4bn) in five years, and debit card penetration has jumped from 4% to 19% over the same period. The effect has been to spark a “brand rush” as both local and global businesses vie for consumer interest – in Moscow, for instance, over 100 beer brands are launched every year.

Russian attitudes to brands, though, were shaped by 1998. The glamour attached to non-Russian global brands has been replaced by a trust in Russian alternatives. Russian brands – particularly food and cosmetics – are generally seen as less artificial, more affordable, and of equal if not higher quality to non-Russian products. But, as most Russian brands are not very proactive in marketing terms, there is huge scope for international brands to counter such impressions. A huge opportunity lies in the shift towards new distribution channels: suburban megastores, discount houses, and most importantly door-to-door salesmen (very rare in the old Russia).

Loyalty to local brands is perhaps a manifestation of the Russian sense of being an exception: the widely held belief in Russia’s status and role as a world power (a sense the current government is keen to bolster). The Russian character is a complex and contradictory one: respect for spirituality and books, but disdain for the intelligentsia that produce them; a distrust of wealth but a sense of generosity and social responsibility; a need for a supreme authority with cynicism about everyday law.

The Russian character may be changing, though. The buzzword of the past few years has been “elitny” (?te) – referring both to the new generation of hyper-rich and the flamboyant lifestyle they inspire. Attitudinal surveys suggest that self-confidence and self-sufficiency are becoming more valued, especially among the young. In the big urban centres a global outlook is fashionable – trends such as sushi bars speak to young Russians’ need for a global identity.

Marketers need to research this new Russian generation, but research in Russia has a short and somewhat difficult history. The industry is growing rapidly – about 25% a year – but traditional methods are difficult. Getting a nationally representative sample in a country Russia’s size is a difficult task; random phone surveys are impossible in many cities, and Russians are sensitive about giving personal information. Newer methods are also hard to apply in a country where only 12% of people use e-mail daily. So research needs to be carefully designed and qualitative insight is particularly valuable. As the Russian market continues to expand and diversify, deeper and more detailed segmentation studies will be key tools in understanding this complex country.

Corruption has always been a problem, yet the level of corruption in Russia is not significantly higher than in Brazil, India or any other emerging market. Moreover, the impact of corruption and administrative barriers on companies working in the consumer market is fairly moderate.

The demographic problem is also slightly overestimated. In the past 15 years (which were the hardest times for all Russians) the population decreased by 4 million (from 147.5 million to 143.3 million), and in the past three years the gap between the death and birth rates has been reducing due to improving economic and living conditions. There has also been a large hidden migration from neighbouring countries to Russia, which is not fully reflected in the statistics.

The reality is that Russia is one of the fastest-growing markets and it provides attractive returns to investors who are not scared by bears with balalaikas walking down the streets. From 2000 to 2005, the Russian GDP increased from $260bn (139bn) to $766bn (410bn) (at current prices), representing compound annual growth rate (CAGR) of 24%, and is forecast to reach $1trillion (535bn) this year.

The consumer boom, which started in 2000 and continues to accelerate, is fascinating. Behavioural patterns have changed dramatically; the retail landscape has altered completely: new products and services, new living standards, new brands, everything is new. Russians are now consuming like Robinson Crusoe after his return to the mainland! Many people like buying things they cannot afford and spending beyond their means; that is why consumer credit and hard work are so popular.

We would not even try to describe Russian consumers in two to three sentences. First, because they are very dispersed and differentiated among regions, social groups, sex and ages. A rich Moscow manager may like domestic chocolates, but would be offended if you tried selling him a Russian car. A regional secretary may prefer Korean instant soup and could spend twice her salary on a glamorous pink mobile phone. People are quite different in Russia – the result of the consumer boom and five years’ economic growth.

Unfortunately, there is a lack of market research about Russians and particular groups of Russians, such as foreign car owners or Visa Gold users. While the Russian consumer market is growing and differentiating, the approaches of domestic researchers remain regrettably unchanged. We would like to see this situation changing. For instance, online research tools could be a good solution as an alternative to traditional methods. In Moscow and major Russian cities, internet penetration is already quite high and in many cases you can reach a wealthy young Russian only in this virtual space. 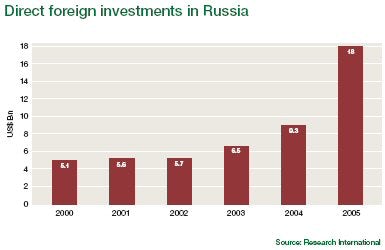 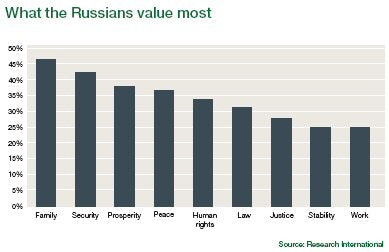 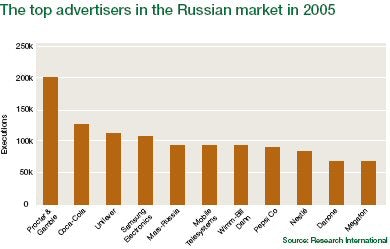