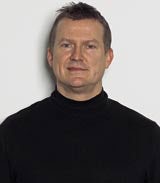 You’d think writing about one of advertising’s most colourful creative bosses would be easy, that there’d be plenty of facts in the public domain about him and many former and current colleagues willing to flesh out his business profile with insights into his character.

But questions about Mark Wnek, chairman of the Euro RSCG Group, are greeted with unprintable descriptives, references to his bullying tactics, his foul language or his hot temper. And many responded simply with: “Surely everyone knows everything there is to know about him?”

In reply to the last, it’s hard to believe that anyone knows Wnek that well, and I wonder if his reputation is borne out in reality. For instance, a few people tell me he is married to M&C Saatchi’s deputy creative director, Tiger Savage. But in fact that marriage, his third, broke down more than two years ago. Since then Wnek, who is 44, has settled down and had his first child, Daniel, earlier this year with partner and long-term friend Sally.

The birth of a first child – often a catapult for change – may have spurred Wnek to ditch his highly paid job at Euro RSCG to set up an agency with Ben Langdon. Langdon, who was group chief of McCann-Erickson in Europe, was ousted a few months ago (MW June 26).

The news of their start-up, due to launch early next year, has genuinely surprised the industry. Not least because both Langdon and Wnek have reputations for running their agencies with a certain degree of intimidation and with a cast-iron grip.

“Who the hell is going to want to work there?” was the response of one agency head. “They are both complete bastards.” He has never actually worked with either Wnek or Langdon and it is reputation alone on which he is basing his assessment. However, his thoughts are not unique.

Wnek, a Brixton boy who went to school with former Labour communications chief Alastair Campbell, and who counts supermodel Kate Moss among his friends, started his advertising career at Ogilvy &amp; Mather. It was there that he created “the pure genius” line for draught Guinness and originated the Rutger Hauer campaign – an idea that is credited with rescuing the brand from near-death.

After becoming the youngest member of the O&M board at the age of 27, Wnek moved on to Lowe to work with Alan Waldie. There he created the Heineken “blues singer” campaign and began to build his reputation as a top-class creative who had the ability to gain the trust of clients.

It was this talent that led him, along with Brett Gosper, to take over at Euro RSCG nearly ten years ago. During his time at the agency, Wnek oversaw the advertising for Peugeot, including the memorable campaign for the 406 launch. “Helping Peugeot become the UK’s third-biggest car manufacturer is one of my proudest achievements,” says Wnek. Although there have been other achievements at the agency over the past year, Wnek gives the impression that he was becoming bored. “When I joined Euro RSCG, I was transformed overnight from a creative director to a chief executive, and really from day one I was in admin,” he says.

This summer, Wnek moved to become chairman of the Euro Group, where he was charged with overseeing all of the group’s companies, including PR outfit Biss Lancaster. It was possibly the final nail in the coffin for Wnek at Euro RSCG because his supporters say he is a true “adman” who would have had “zero” interest in other aspects of the group. “Wnek is a very strong creative director,” says TBWA/London’s planning director Neil Dawson, who believes Wnek has been strangled by the corporate world of Euro. “This new agency will have a liberating effect on him.”

Described almost unanimously by those who know him well as “extremely bright and ambitious”, Wnek, who has a French mother and Polish father, won a scholarship to Dulwich College and secured a place at Gonville and Caius College, Cambridge, where he read English Literature.

But it seems that with his intellect comes a difficult personality, and his friends admit he is either the type that you like a great deal or “he scares you half to death”. They say he is best suited to those who have an argumentative or cynical nature, though he has, suggest many, mellowed since the birth of his son.

“There’s an air of physical violence about him, but he doesn’t bite, he just barks,” says one former colleague. “It depends what sort of mood he’s in. You can go in to his office, have a good laugh with him, leave with a cosy warm feeling and two minutes later he passes you and completely blanks you.” He adds: “You can’t help thinking ‘come on man, grow up; it doesn’t hurt to say hello’.”

Perhaps the best person to judge him is his former partner Gosper, who now heads McCann in New York. He believes that Euro RSCG has not seen enough of Wnek’s temper in recent years, and thinks that Wnek’s occasional bouts of rage are a sign he’s “trying to achieve something”. He adds: “Wnek doesn’t suffer fools gladly. He likes to make people uncomfortable to begin with, but he is much more a motivator than a bully.”

In response to accusations that he is a tyrant, Wnek admits he has not always been “kind”, claiming he had to be tough to sort out Euro RSCG. He also concedes that he can be a tad childish: “I think it was Baudelaire who said that genius was ‘childhood recovered at will’,” he says.

Many people point to a profile in The Sunday Times more than three years ago that portrayed Wnek as the archetypal arrogant adman. Those close to him say he was “mortified” by that coverage. Wnek claims the journalist grossly misinterpreted his sense of irony. He was quoted as saying his mortgage was so big he “could not bring himself to say it out loud”, that he had “300 shirts and ties” and that if his creative team did not crack a brief, “they get fired”.

Even though this took place a few years ago, Wnek is evidently bruised by the article and takes his time when answering questions. But not so cautious that, when I ask him if he shares any personality traits with Langdon, he can resist saying: “Our agency will never happen. We are going to have a big fight and it will never get off the ground.”

Of course he’s joking, and this warped sense of humour is typical of Wnek, but his former colleagues do point out that Langdon and Wnek’s agency will have to be successful quickly, or it will never happen.

“Mark [Wnek] has a short attention span,” says Euro RSCG Partners chief executive Chris Pinnington. “He’s only happy in a meeting for about ten minutes and then he will get up and wander off. If this new agency isn’t successful very quickly, he’ll tire of the whole thing.”

Getting a straight answer from former colleagues about whether Wnek – who can be very charming and highly amusing – is as bad as his reputation is not easy. They seem fairly split between those who love him and those who hate him. Almost all, however, consider him one of the most talented people in advertising.

Beguiled by both Langdon’s and Wnek’s indisputable track records, even the wariest of advertisers may overcome their reservations. In fact, if insiders are to be believed, the first client has already passed through their door.