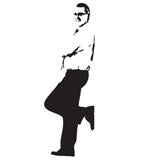 The new year cannot begin as badly as the hell caused by snow-induced travel chaos at the end of December. On the Sunday before Christmas I made one of the worst decisions of my entire career and opted to snow plough ahead with a business trip to Holland.

The meeting was important, but not business critical, and people smarter than me might have taken a more pragmatic view and postponed due to the extreme conditions. Not me. I am a dedicated and determined soul. Or perhaps that should read foolhardy and misguided.

As I endured the initial outbound mayhem that is otherwise branded as Heathrow Terminal One, I was offered a final opportunity to do what I should have done all along and abandon this trip. Already late for check-in due to the icy motorway, the airline check-in machine refused to print my boarding pass. They were closed for business and I was frozen in my tracks.

With hindsight, this would have been a very happy ending but the fact that my plane required de-icing allowed an unfortunate late reprieve. I was allowed to go to departures and to embark on the business trip from hell.

To remind myself of my stupidity, I recorded the following in my diary on Tuesday, 21 December. “Still in Amsterdam. Anything I may have potentially earned for the company off the back of this half-day meeting has long since been wiped out with hotel bills, wireless internet charges, a horror mobile bill, taxis and countless cups of coffee.

I have even had to buy a new emergency wardrobe and have boosted the profits of the Dutch version of Boots the Chemist with major capital expenditure on toiletries. My expenses tab will accelerate further when I eventually return to the bright lights of Heathrow to collect my car from the now not-so-short-stay car park.

For the first time in my life, I am looking likely to be punished for being disorganised and not doing my Christmas shopping in advance. The clock is ticking and unless there is a material change in travel schedules, the family Secret Marketer shall have to make do with fake tulips, windmills, clogs and other Dutch tribute tat from Schiphol airport.

Not even internet shopping can save me this year. Christmas delivery guarantees have long since expired. Rarely has a business meeting got me in so much trouble.