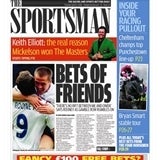 The Sportsman, heralded as the first national newspaper launch for 20 years when it hit the newsstands in March, is struggling amid reports its management team has spent the &£12m start-up budget and is seeking an extra &£4m from the title’s original backers.

Ahead of its launch, much was made of the newspaper’s heavyweight executive team that included former Telegraph Group chief executive Jeremy Deedes as chairman. Equally, much media focus was given to a quote credited to Deedes, stating that the chances of The Sportsman’s survival were healthy because the circulation target required for profitability was only 40,000 – just over half the average circulation of its 20-year-old rival, the Racing Post.

Four months on, the picture is very different. Speculation is rife that an imminent funding announcement will be conditional on a new management team being found to replace Deedes and editor and publisher Charlie Methven, the former Evening Standard and Telegraph journalist.

All this may ultimately prove too much for a newspaper that lost marketing director Mark Dixon in May. Dixon left to start a sports marketing agency, while founder and managing director Max Aitken departed only a month later. If that wasn’t enough, according to one insider, “appallingly inconsistent distribution” plagued the title before its recent switch to the Daily Mail’s distribution network – it previously used that of the Telegraph.

Since the funding troubles emerged, knives have been out for the paper in the media community. One source questions why the team revealed it only required a circulation of 40,000: “It was unnecessary and bound to come back on them if they failed to hit targets.”

If a fresh injection of cash is going to save The Sportsman from an early bath, questions about what has gone wrong need to be answered quickly. One theory is that the strategy of relying on growth through word-of-mouth marketing – necessary because of the small launch budget – was hopeful at best.

Extensive advertising in tabloid newspapers, and sponsorship of various Sky TV broadcasts to coincide with the launch, was the limit of The Sportsman’s marketing. According to one insider, this “probably should have been done further down the line. As a niche publication we’ve learned we should have had a more ‘micro’ early approach, and marketed ourselves on launch just to the racing and betting industry, before doing the larger push to the wider audience.” The source adds that &£12m was always going to be quickly spent on a daily newspaper with 120 staff.

A change of focus

But another insider, who believes marketing was not necessarily the problem, says it might have been the product that was wrong – an opinion strengthened by reports that The Sportsman may increase its focus on racing, rather than betting and gaming of all kinds. This source adds: “Even within our limited budget we created enough noise and awareness around the launch period – first week sales averaged around 45,000.

“Why wasn’t that initial healthy circulation retained? Was there ever a market of 40,000 daily buyers out there? Our research showed respectable numbers of people would buy the Saturday edition, but many said they probably wouldn’t buy it more than twice on weekdays. By that time, however, investment had been brought in, business plans were written, momentum was rolling – and alarm bells were largely ignored.”

A comprehensive recovery plan must be drawn up, and enough money made available to execute it, while the paper continues to pay staff. As The Sportsman squares up to the Racing Post as a pure racing title, it must face some tough decisions over the coming weeks.