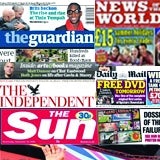 Traditionally, December is often a poor month for newspaper circulation as the holiday season disturbs purchase patterns, but last month’s figures were exacerbated by distribution problems and purchasers unwilling to leave their homes in the bad weather.

The overall average net circulation for popular titles dropped 5.47% month on month and 4.75% year on year, for the six months July to December, despite titles consistently covering ITV’s X Factor, which received record viewing figures for its finale last month.

In the mid-market, the Daily Mail hit a 10-year circulation low for the title and is dangerously close to dropping below its psychological benchmark of 2m readers, with a fall of 3.33% to 2,030,968, down 1.83% year on year. However, the Associated Newspapers title did record its highest ever ABC market share during the month. The Daily Express fell 2.5% month on month to 623,689 and is down 8.11% year on year.

In the quality market, circulations dropped across all titles, with an overall decrease of 2.95% month on month and 11.6% plummet for the six month period, year on year.

There were fears the launch of the i newspaper in October could cannibalise The Independent’s sales. The i has delayed releasing its circulation figures until February due to distribution issues contributing to an unstable sales picture. The Independent has held up relatively well, with circulation down 1.48% month on month to 175,002 and down 3.49% year on year.