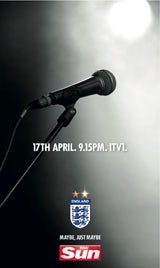 The move comes a day after its sister publication the News of the World revealed Tim Westwood would be its celebrity World Cup ambassador.

A series of ‘teaser’ print and TV ads which feature the end line ‘Maybe, Just Maybe’ have been appearing over recent weeks, with a second star appearing over the Three Lions England  badge – something that the England team would add to its kit if successful in winning this summer’s tournament in South Africa.

But the full content of the 60-second spot, which forms the centre piece of the campaign, is being kept tightly under wraps by the paper and their creative agency WCRS.

News International’s Rob Painter, who led the campaign in his role as interim marketing director for The Sun, says: “Saturday’s big reveal kicks off one of the most ambitious marketing initiatives ever waged by The Sun.

“We have created a marketing campaign that reflects our unique ability to ignite and capture the mood of the nation, a quality that will make The Sun the number one World Cup destination.

“Whilst we can’t reveal the specific content, readers can be sure that this is the start of what we expect to be one of the most iconic campaigns of the 2010 World Cup.”

Further updates and teasers will be revealed in paper and via the campaign’s Facebook fan page in the run up to the airing of the advert on Saturday evening.

The ad marks the start of a three-month long integrated marketing initiative backing the England team and reminding readers of The Sun’s unrivalled heritage as the nation’s favourite World Cup paper.