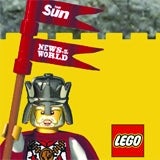 The ad features a Lego king, voiced by comedian Ben Miller, announcing the free offer to his legion of Lego followers.

The Sun and the News of the World are offering coupons to collect seven free Lego toys from 14 May until 20 May. The toys include the Star Wars X Wing, the Black Pearl boat from Disney’s Pirates of the Caribbean and the Ninjango Skeleton Chopper.

Readers can redeem their vouchers at WHSmith and Toys R Us.

The Daily Mirror ran a similar promotion earlier this month, when the paper gave away six Dr Who toys redeemable from Toys R Us and Sainsbury’s. However, it lost its Lego promotion this year to News International following a competitive pitch.

The TV ad was created by WCRS & Co and Hornet.