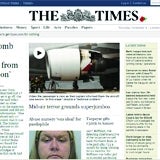 Sandhu is said to have been responsible for delivering the paywall, which launched in July, with all those working on Times Online reporting into him.

His departure comes shortly after parent company News International revealed the first set of post-paywall figures for the site.

The newspaper group said earlier this week that it has 105,000 paying digital-only subscribers, as well as a further 100,000 joint print and digital subscriptions.

Sandhu joined The Times in January from NewsCorp’s Star TV, where he was senior vice president for new media and IT.

He had a stint as operations director for new media at News International from 1999 to 2001.

It is not known if he has another job to go to or if he will be replaced.

A spokeswoman for The Times confirmed his departure but declined to comment further.