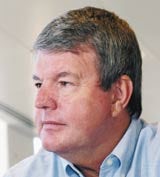 A month ago, when Nectar and Air Miles founder Keith Mills read about the mounting pressure on 2012 Olympic bid chief Barbara Cassani, he was seemingly safe in the knowledge that this was someone else’s problem.

But following his appointment last week as chief executive of the London Olympic bid, it now falls to Mills to explain to the world’s press – and indeed to the whole of the UK – exactly how London will recover from what even Cassani has admitted is a slow start.

Cassani offered the loyalty scheme mastermind the job over dinner, not far from the bid team’s offices in Canary Wharf, at the beginning of September. The London Olympic board had already rejected two candidates – Coca-Cola executive Brendan Harris and lawyer Jonathan Sykes – and Mills says the challenge looked daunting. It took two weeks of persuasion from Cassani before he accepted the position.

“It is an awesome responsibility,” says Mills. “The whole of the UK will be looking at me. It took a while to get my head around the task.”

Married with two children, the 53-year-old made sure his family were happy to have him devote the next two years to the bid. Mills will take responsibility for day-to-day organisation, leaving Cassani to play a broader strategic role.

The timing of the offer couldn’t have been better for Mills: he was already passing the bulk of his responsibilities at Loyalty Management UK to chief executive Rob Gierkink, to find time for a separate – and now defunct – sporting venture.

He remains non-executive chairman and majority shareholder in Nectar, the conclusion of a steep career ascent from humble beginnings. Appropriately, part of his new role will be to redevelop the deprived areas of London’s East End, an area he is familiar with having attended school there until he was 15. He then left to wrap printing blocks in Fleet Street.

In the Sixties, he moved to the marketing teams at The Economist and Financial Times, before joining agency Newton &amp; Godin. Mills acquired the London office of US agency Nadler &amp; Larimer, and set up his own agency in 1985. During his tenure as managing director of his agency, Mills Smith, he resigned the Omnicall account after refusing to run provocative and potentially sexist ads for the US chatline operator.

As the Eighties drew to a close, he helped to create, and then run, the Air Miles loyalty scheme for British Airways. He sold his stake in the venture in 1994, working as a consultant on the scheme until the launch of Nectar last year.

Mills says there are no plans to use Nectar as part of the marketing for the Olympic bid, although he admits his contacts will help: “I don’t think there will be any link-up with Nectar, but we may work with companies that have participated.”

The speed of his appointment to the London Olympic bid team underlines the pressure on Cassani. She has admitted that London is lagging behind favourites Paris and New York, and has been criticised for the delay in establishing a team. But the senior line-up is now complete with the appointment of Mills, and – using the language of the airline industry where she cut her teeth – Cassani says: “We have just had lift-off.”

Mills rejects accusations that Cassani has neglected sports experience to build a team based on her airline contacts. “Despite Air Miles,” he says, “I didn’t know Barbara before we met for dinner and I’ve never worked for an airline.”

Mills’ appointment instead adds to the pool of marketing experience applied to the Olympic bid team. Describing himself as a “very experienced marketer”, Mills says there will be clear boundaries where his role stops and where that of marketing director David Magliano starts. And last week, Cassani appointed Chris Denny as head of marketing. Denny had been the account manager for Benson &amp; Hedges at Collett Dickenson Pearce, before becoming sales and marketing director at post-production outfit The House.

Magliano says: “I will take responsibility for marketing in a broader sense – to persuade people that London is the best place for the games. The role will involve classic marketing, but also political discussions with IOC members.”

Mills says that 55 per cent of households have signed up to Nectar. He will need the skills that made the loyalty scheme such a success to generate enthusiasm among the British public – a bid needs at least 80 per cent support if it has a chance of winning. His mettle was tested earlier this year, when he was forced to apologise personally after a Nectar customer received a letter from the company containing a racist insult.

Nectar marketing director Richard Campbell says Mills’ attributes as a facilitator, developed at Air Miles and Nectar, will be useful: “Nectar is a coalition and he was brilliant at getting different people from different organisations working towards a common goal.”

But Mills was offered the Olympic job based on his reputation for creating, rather than managing, business. Cassani describes his “winner’s mentality” and experience in business start-ups as the key factors behind his appointment.

The decision on the Olympic bid will be made in July 2005, which Mills says is equivalent to the time it takes to start up a company. “This is what I am good at: starting new ventures and seeing them to fruition. The bid is similar to my previous roles; it’s even structured as a limited company.” But, he says, the most important tasks will be to market the UK to the International Olympic Committee and to generate public support at home.

Ford marketing director and Nectar partner Peter Fleet says that his “unstuffy” manner of business will be invaluable. “He doesn’t have the stuffiness that others have at his level. At Nectar meetings he is relaxed but highly confident, which is very engaging.”

Fleet adds that Mills has the natural drive of the successful entrepreneur: “He has confidence in his achievements and gets excited about success. I’ll be very surprised if failure is an option he has considered.”

Mills, however, was not initially so confident. It was only after consideration of its chances of success – which he now says are very high – that he decided to join the London bid team, a decision helped in no small part by his love of sport.

Mills is a keen sailor, winning the Clipper yacht race in 1999 – sailing, coincidentally, is the UK’s most successful Olympic sport and the sport of choice of IOC president Jacques Rogge. Next year, Mills will sponsor sailor Alex Thomson in the 2004 VendÃ©e Globe event.

But this is the only side-project that Mills has allowed himself – he has even put his yacht, Frequent Flyer, up for sale. Mills knows the bid will be an all-consuming task and one that is sure to make him a very public figure.

But while he may no longer have the time to sail himself, Mills is relishing the challenge of helping the next generation of UK athletes. “This is a once in a lifetime opportunity,” he says. “And I wouldn’t have joined unless I thought we had a very good chance of winning.”