Over the past week, countless content creators, media owners and tech companies showcased their plans for 2016 during the IAB UK Digital Upfronts. From Sky’s cross-platform tool to BuzzFeed UK’s video division, find out what brands should be focusing on in the upcoming year.

AOL is set to make a bigger push for video as it plans to produce more original content on its media platforms, including The Huffington Post.

AOL believes it differs from other media owners through its combination of “culture and code”. Speaking to Marketing Week last week, AOL’s commercial director Stuart Flint said that sponsoring original content is a useful way for brands to engage with customers.

“It’s about marketing in a way that feels relevant to them, and with sponsored content they understand that there’s been a trade of value.”

Meanwhile, millennial media magnet BuzzFeed is opening up its branded video content division to UK advertisers. Costa is the first brand to partner up with an advert set to launch later this month.

BuzzFeed’s video division currently averages just under 2 billion views a month. Previous video partnerships with brands like Hyundai and Purina have racked up millions of YouTube views and shares. Now, the brand is entering the UK market.

“We are hoping to ultimately build long-term relationships with advertisers. The most important thing that we want from brands is a willingness to work together. I tend to find that the more freedom we have, the better we do,” she said.

Almost two years after the launch of targeted advertising service Sky Adsmart, Sky has decided to step up its data game by introducing a new service that allows advertisers to connect customer journeys across multiple devices.

Sky AdVance directly connects TV and online audiences using viewing behaviour as well as multiplatform and device data. This means advertisers can address the most relevant audiences on multiple screens, while also being able to target their campaigns to people that haven’t seen it yet.

Sky AdVance will be on the market from January 2016 and is and is currently undergoing a live test phase with up to 20 different advertisers.

“Having to transact these integrated plans in siloes feels counter-intuitive to most agencies and advertisers. We’re trying to build effective advertising solutions that can enhance cross-platform power and in turn enables Sky to be a partner to advertisers rather than just a supplier,” he said.

Bloomberg Media also introduced a range of ad tech tools, including B:Match, a private data and analytics tool that identifies audience segments and consumer behaviour, Social Connect 2.0, which allows advertisers to target readers referred through social media and Trendr, an algorithm-driven tool that allows advertisers to associate with the most newsworthy topics, people and companies.

Bloomberg Media’s commercial director for EMEA Matt Teeman, says: “Our ongoing investment in technology means our customers can secure even greater value, engagement and response from our multi-channel media portfolio.”

While Yahoo prides itself on its original content, the company is planning to put a bigger focus on native advertising on its mobile platforms going forward.   When it comes to upcoming brand partnerships, Tumblr is being put front and centre as it allows advertisers to adapt their campaign content to the platform.

“It’s important to think about how the user interacts with their mobile and what they want to see when they’re using it,” she said.

While Yahoo is going after digital advertisers, Vice is hoping to take on more traditional platforms as it plans to expand into TV across the UK and Europe with the launch of Vice TV.

The youth media brand previously entered numerous TV deals in the form of networks and shows across the US, Canada and Europe and has licensed its online content to linear media for years.

All its TV networks across Europe will be produced exclusively by Vice, utilising the youth media brand’s hosts, writers, producers, filmmakers and directors. 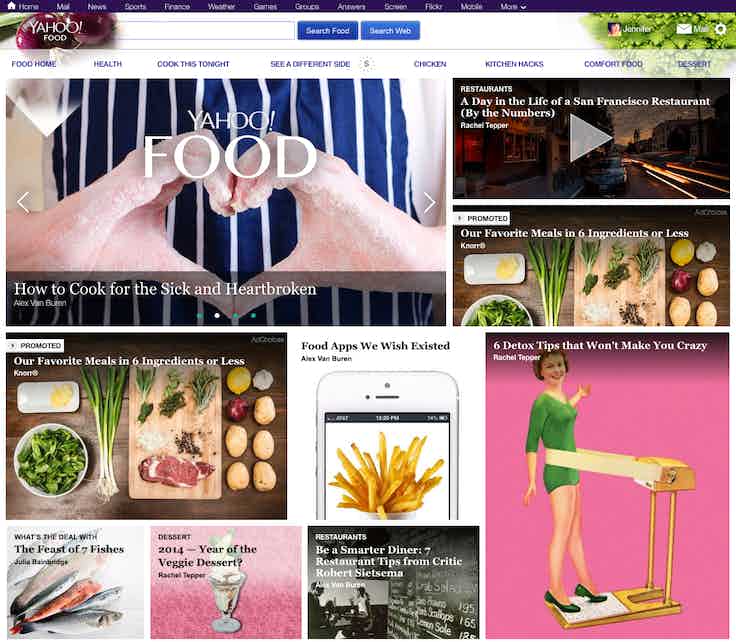 Yahoo has announced the launch of a new content marketing solution that allows brands to maximise its earned media through data-driven content built specifically for the Tumblr platform.

BuzzFeed is opening up its branded video content division to UK advertisers. Costa is the first brand to partner up, with an advert set to go live later this week.