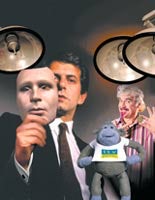 Many hundreds of millions of pounds have been poured into relaunching some of the UK’s top brands, but this expenditure by no means guarantees success. Much of it is wasted on clumsy renaming exercises, poorly executed publicity drives and meaningless advertising campaigns. Failed relaunches have resulted in some of the biggest marketing disasters in history. Relaunches, it seems, are in need of a revamp.

Hardly a day goes by without news of another brand trying to restore its fortunes through a multi-million pound refreshment exercise. Just last week, Boots announced it was to spend &£170m on refreshing its stores and rebuilding its image. This came as Gerald Ratner revealed that he is returning to the world of jewellery retailing, 11 years after destroying his own business with the infamous comment that products on sale at his eponymous stores were “crap”. ONdigital changed its name to ITV Digital and adopted Johnny Vegas and the knitted monkey in a popular ad campaign that failed to save the broadcaster. The Post Office’s new corporate name – Consignia – made it a laughing stock, and it is changing the name again, this time to the Royal Mail Group.

There have been successes, though. The Mini brand has been relaunched successfully by BMW; and Lucozade managed to transform itself from a medicine for sick children into a youthful sports drink. Marketers are looking to these examples for answers to the relaunch conundrum: why do some fail while others succeed?

It’s new, but is it any better?

The jury is still out on much recent activity, such as Mars Bar’s lighter texture and new ad slogan, and Nestlé’s revamp of Yorkie (MW April 4). People are also wondering how O2, the new brand for BT Cellnet, will fare and whether One 2 One’s new life as T-Mobile will be long and healthy.

But of all recent relaunches, it is perhaps last month’s revamp of Britain’s biggest consumer brand, the National Lottery, that will have the most fundamental implications (MW April 11). If sales continue to fall, optimistic predictions about rebuilding Britain through Lottery funds will prove fruitless. And the early evidence is not encouraging.

Just two weeks after the &£70m relaunch under the new name of Lotto, sales hit their lowest level since the Lottery began, plummeting to &£43.6m for the May 25 draw (MW last week). Camelot spokesman Andrew Jones says the relaunch must be judged in the long term, and that its aim is to differentiate between the National Lottery brand – which concerns good causes – and the Lotto game brands, which are about winning. “By creating that space, we can market more robustly and bring more focus to those games over the long term,” he says. The big change will take place in September, when a midweek Thunderball draw will be launched. And the launch of Lotto Hot Pix will give more smaller prizes for matching fewer numbers.

“The relaunch is a platform for future activity,” he says, adding that the fall in sales on May 25 was anticipated, as there is “some confusion out there” about Lotto and the “four draws for a pound” promotional mechanism that accompanied the relaunch. Jones contends that, when players understand the new game mechanisms, sales will be restored, and the full benefits of the relaunch realised.

Relaunches are not always carried out for the best of reasons. Managers may know there is a problem with a brand, but be unable to crack the problem. John Williamson, a director of brand consultancy Wolff Olins, says: “A lot of managers just change things around, but don’t fundamentally address the issue. When they get into a losing streak, a lot of brands lose the affection of their customers and change. You should change when you are winning, not when you are losing.” He says there is no longer anything “special” about the National Lottery: “It’s just a product, and people want an idea. If Camelot can’t take that on board, it will die.”

Examples of monumental relaunch cock-ups abound. In 1985, Coca-Cola changed its taste and relaunched as New Coke. Consumers hated the reformulated drink and, just 77 days after the product went on the shelves, the company was forced to withdraw the new formulation and return to the old recipe.

Lever Brothers relaunched Persil in 1994, with a new sub-brand called Persil Power, in an attempt to move in on rival Ariel’s core territory of stain removal. Persil Power, it turned out, was more than efficient, and regular washing rotted certain types of material more than the average laundry detergent. Persil Power was rapidly axed and replaced with New Generation Persil. And British Airways found the re-branding of its tail fins with “ethnic” designs went down so badly in the UK that it had to revert to the old Union Jack logo.

Don’t believe everything you read

There are plenty of theories aboout why brand relaunches go wrong. Nike Cloke, director of consultancy Catalyst, says: “What links these examples is brands taking consumer research too much at face value, so you only get one lesson. In the case of Persil Power, customers wanted greater cleaning power. This led to one-dimensional development. Rather than taking the research verbatim, it needed interpretation.”

In the case of New Coke, he says, Coca-Cola became obsessed with the fact that it was beaten by Pepsi in blind taste tests, because people instantly opted for the sweeter-tasting cola. “Coke had a niggling feeling that Pepsi came out better because it was sweet

er and saw this as a long-term threat to sales. But branding is such a massive part of buying cola that when it had a different taste and look, people felt Coke had changed the whole product,” says Cloke.

In the case of Camelot, he says consumer research probably showed that people were a bit bored of the game. Rather than change the nature of the game “which is what it should have done,” it changed the name, which was not the problem.

According to Lindsey Tier, lead strategist at brand consultant Corporate Edge, relaunches have to be judged on two factors – the extent to which the relaunched brand stays true to, but adds to, the basic values of the brand, and the way the relaunch is executed in communications terms. She feels that New Coke and Persil Power failed both of these tests. Consignia met the first criterion, as there was a good reason for changing the name – the company wanted to compete more heavily in international markets and needed a name that worked well across borders. But she says the relaunch was not well executed, as many people thought that the name was going to be used on Post Offices around the country. As a result of this misunderstanding, the change became highly unpopular. BA, she believes, also falls into the category of having a well-justified, but badly explained, relaunch.

Camelot’s problem is slightly different: the relaunch has been very well-communicated, with amusing ads starring Billy Connolly and a powerful poster campaign. But Tier believes that the relaunch has failed to tell people what the new Lotto brand stands for: “The advertising has been exciting, but the company is not defining clearly what Lotto is all about.”

Examples of brands that have succeeded in both criteria include, as mentioned earlier, Lucozade – which carried the basic value of energy provision into a more youthful format and presented it well. French Connection maintained its positioning as a cutting-edge fashion label when it became FCUK. Tango, which was recently relaunched with new advertising, has retained its core brand value of fruitiness.

Tier says it is harder to assess relaunches of service brands, as they have so many variables, but believes that Tesco succeeded with its Every Little Helps campaign.

Don’t go out there – it’s too risky

Andrew Seth, chairman of consultancy The Added Value Company, says companies are becoming timid when it comes to relaunches. Pressure from the City for short-term performance gains makes chief executives wary of taking risks on brand relaunches. Downsizing means there are fewer executives capable of bringing off a big relaunch, and globalisation makes it more difficult to relaunch brands, as it has to be done across 20 or 30 markets at a time. “The whole process, which we used to understand, and which was able to produce reasonably predictable results, is a great deal less certain,” he says.

Seth was chairman of Lever Brothers at the time of the Persil Power disaster in 1994. He says it was a watershed in the history of relaunches. Unilever was on the “cusp” of change and was becoming a more global player. Part of the problem, he says, was that the relaunch was so visible, taking place across different European markets. This made it a target for rival Procter &amp; Gamble, which told its scientists to test the product. The rest is history. Had the launch taken place just in the UK, Procter might not have focused on it and its slightly exaggerated propensity to rot clothes (something that all detergents do) would have passed unnoticed.

You need support through the change

There is no easy formula to follow to make a relaunch successful. Interbrand chairwoman Rita Clifton says the underlying affection consumers have for a brand is crucial for a successful relaunch. Camelot has long been vilified as a “fat cat” organisation, skimming the cream off a national institution, so its relaunch is not one that carries much goodwill. But she says: “The Lotto relaunch is sensible and the advertising has been good. But it is difficult to change everything, and there are still a lot of outlets that have the old, slightly tired branding. Is there enough to say Lotto is really new?”

It seems that, in their desperation to turn around a failing brand, marketers all too often have tunnel vision. They think a relaunch that addresses one particular failing – sweetness, cleaning power, or a boring name – will make all the difference, when often there is a much more fundamental problem. Marketers may need to look again at how they relaunch products before they waste even more money.

Discount stores are struggling to maintain market share as the major supermarket chains play them at their own game.

The European Parliament has finally compromised with industry over spamming