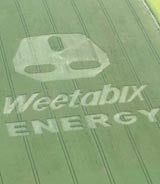 In scenes straight out of the early Nineties, two FBI agents were flown in by the Government this week to investigate spooky goings-on in Beckhampton, Wiltshire. They were taken to a field, where, overnight, a crop circle had appeared – but this was no ordinary crop circle. Trampled into the plants was the image of a three-pin plug. The local villagers were worried and already looking for a mad scientist to burn.

Finally, after many significant glances, much talking in hushed voices and the unearthing of some frankly ridiculous conspiracy theories, somebody from Weetabix arrived to claim the “circle”. They apologised for causing alarm, explaining it was part of Weetabix’s latest marketing campaign, and to avoid further confusion they added the words: “Weetabix Energy”.

Back in the real world, the field’s owner, David Hughes, says: “Most people accepted it [the crop circle] was from Weetabix, but rather oddly some paranormal experts still think it’s a message from beyond.”