American brands are more advanced in customer segmentation and brand experience than UK counterparts, and are more aligned internally, meaning they continually outperform the UK in customer experience.

The US beats UK companies by an average of 2% on customer experience scores, according to the latest US Customer Experience Excellence report by consultancy KPMG Nunwood, with the top five American brands scoring the best in the Western world. Although this figure is down from an average of 5% in 2015, the UK is lagging behind, having yet to improve on its overall score in the UK version of the research.

David Conway, senior partner and chief strategy officer at Nunwood, says: “The key message is that you’re still more likely to have a great experience in the US than in the UK, which is some years ahead of us. At the current rate of UK progress, which is almost minimal, it will take the UK three to four years to catch up with the US.” 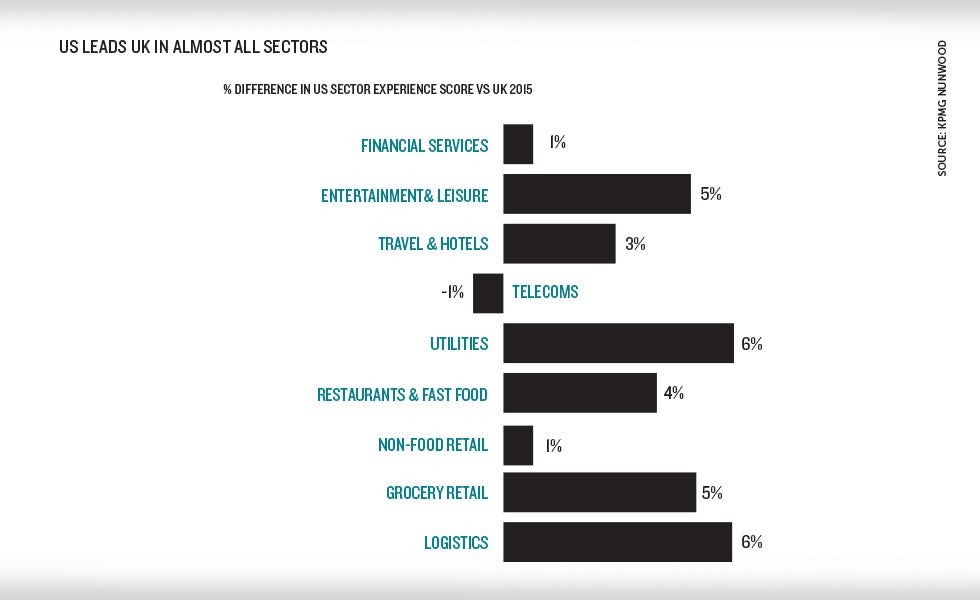 The US outperforms the UK across all six pillars, the most prominent of which is problem resolution, where American companies score 7.30 out of 10 compared to 6.95 in the UK.

There are a few factors that contribute to this gap, including the use of technology in the US to solve issues, and the fact organisations are structured in a way that encourages responsibility for resolution, which empowers employees to solve problems in a way that is appropriate for each customer.

The study suggests this drives a ‘service recovery paradox’, where a problem is resolved in such a way that it leaves the customer feeling better about the organisation than they did before the issue occurred, which the UK is yet to master.

“The US has understood [the service recovery paradox] in a way that the UK never has,” says Conway. “The UK is very focused on just dealing with complaints and putting things right. The US is one step further; [it’s] not good enough to just put it right, you have to do so in a way [that makes] the customer feel better about the business.”

Conway also believes that, along with employees feeling empowered, American businesses have invested in and given staff access to technology that enables them to manage the workflow associated with customer issues in an efficient and effective way. 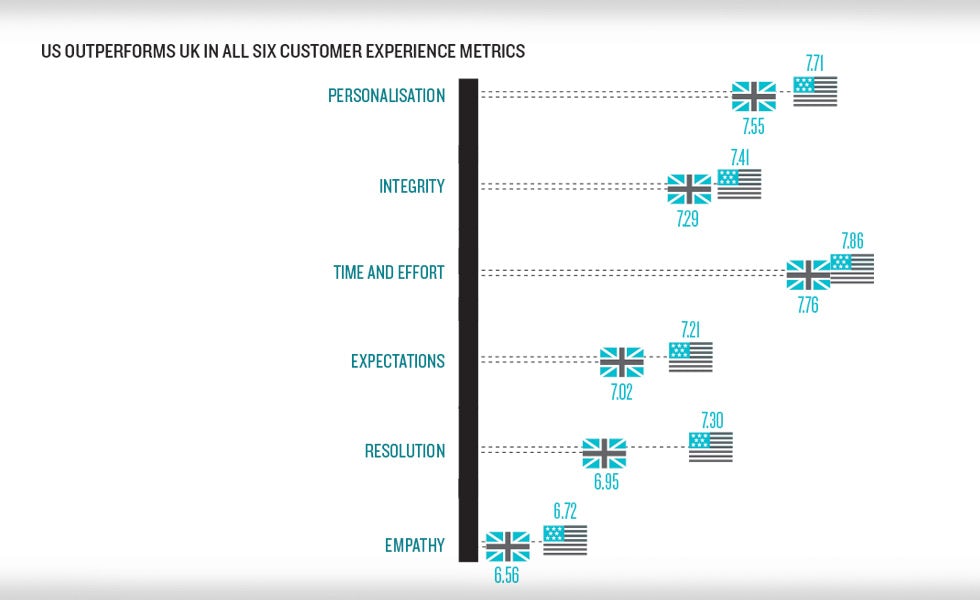 In a sector analysis, the US again outperforms the UK almost across the board. The difference particularly shows up in the utility and logistics sector, with an average score difference of 6% between the two countries, while American grocery and entertainment brands perform 5% better than in the UK on average.

The telecoms industry is the only sector where the average falls in the UK’s favour, beating US brands’ score by 1%.

Conway lists several areas where the US is more advanced than the UK, including segmentation, tracking the customer journey and brand experience. He says that where the UK tends to use demographic segmentation, the US looks at the experience that people value in each target group and filters that down in a more structured way than the UK. 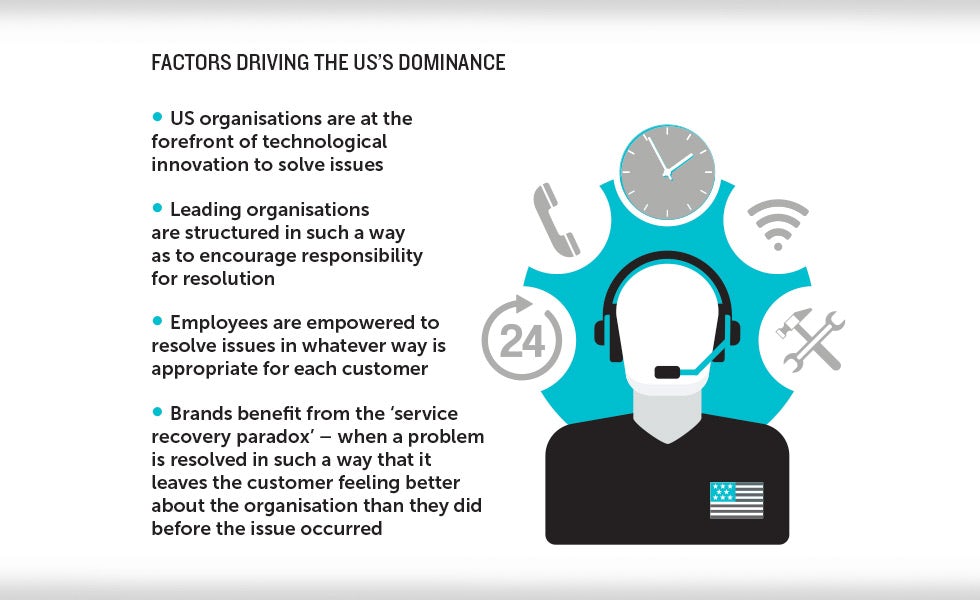 Finally, the US puts on more of a show to achieve customer excellence, according to Conway. He says: “They are multi-sensorial – there is a greater sense of theatre with the experiences that they create – [while] we are still very British,” by which he means reserved.

“You go to Wegmans or Costco and it’s a destination and experience in itself, the food is showcased rather than just displayed; [there are] more visual interactions and demonstrations,” says Conway. “We lay things out in a way that is efficient and convenient but we don’t excite or inspire the imagination of our customers in a way that the US supermarkets seem to do.”

However, he says that top UK organisations such as Lush, which came out on top in the 2015 rankings, could catch up with the leading US companies, as he sees the prominent UK brands making good progress. 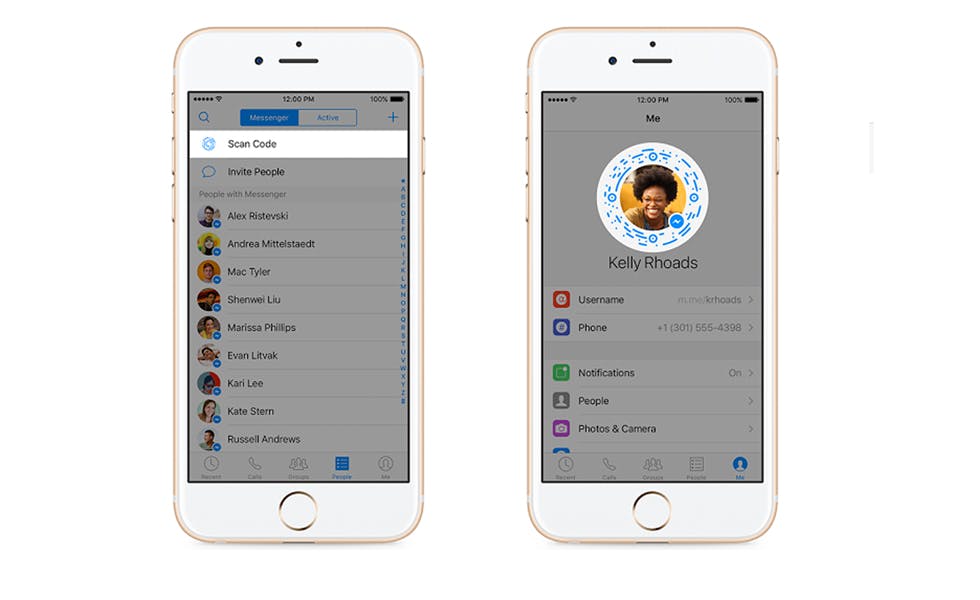 With Facebook adding new tools to its Messenger platform, including the ability to scan unique user codes to start a conversation, both brands and agencies expect the social media giant to develop into a clearer customer service tool. 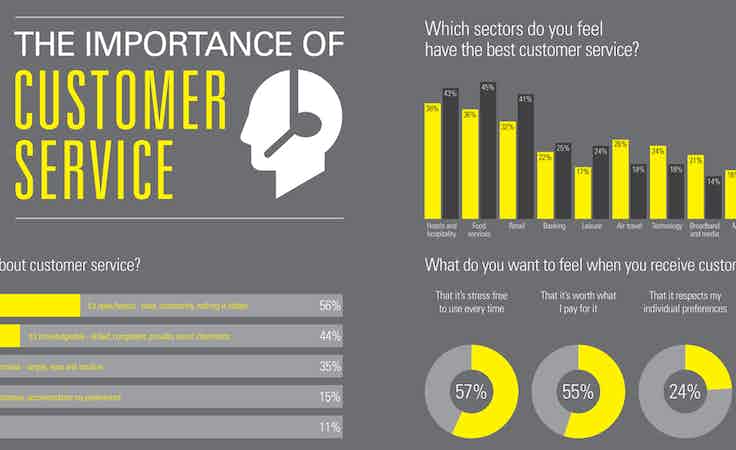