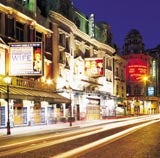 London’s theatreland has always been one of the capital’s key attractions and with 12 million trips made last year alone, its allure shows no sign of dimming.

Research from MORI, carried out for the Society of London Theatre, shows that the West End is still a draw for tourists, with 60 per cent of theatregoers living outside London. Four out of five of those out-of-town respondents say that the theatre was a major factor in their decision to visit London. Indeed, two in five say it was the main reason. This suggests that each year, over 3 million trips to London, including about 500,000 overseas visits, are driven mainly by the theatre.

The average number of visits by theatregoers to London’s West End each year is six, which means that just under 2 million people visit the theatre in any given year. Perhaps predictably, the average number of attendances is highest among London residents at 9.2 a year. This falls to 4.5 visits a year for theatregoers from the rest of the UK and 3.7 for overseas visitors.

A majority of visitors find the theatre to be a worthwhile afternoon or night out with nine in ten theatregoers describing their experience as good. Despite press reports about high ticket prices, theatregoers are also positive about this aspect of their trip: eight in ten rate the visit as worth the price of the ticket.

On average, theatregoers spend &£87 on each trip to the theatre. This includes the ticket itself, plus transport, food and drink, accommodation and other purchases associated with the visit. Theatre visits thus bring &£1bn of direct expenditure into the capital.

Women make up almost two-thirds of theatre audiences, although the gender gap does narrow with age. Among theatregoers aged over 55 years old, the split is down to 60:40.

There is a quite even age spread of theatregoers. About a third are 15 to 34 years old, another third are 35 to 54 years old and the final third are 55 years old or over. The average age of a theatregoer in the West End is 43, which is up slightly from 42 – itself a record at the time – in 1997, when this research was last undertaken.

As it can be expensive to visit the theatre, it is perhaps unsurprising that 55 per cent of theatregoers work full-time. Among the remainder, there is a fairly even spread of part-time workers, students and people who have retired.

Theatregoers are well-read, with three-quarters of UK-based respondents reading a daily newspaper. The Daily Mail, The Times, The Guardian and The Daily Telegraph are the most popular titles. There is a correlation between respondents’ preferred genre of performance and their readership of different daily newspapers. Opera fans, for instance, are particularly likely to be Times readers, while Guardian readers prefer plays and readers of the Daily Mail favour musicals.

Theatregoers also enjoy listening to Radio 4, although the proportion who say that this is the station that they listen to most regularly has dropped from 33 per cent to 21 per cent over the seven years to 2004.

While 71 per cent of UK theatregoers say that they listen to one radio station more regularly than any others, this has fallen from 79 per cent in 1997. As a consequence, the numbers of respondents saying their regular station is Capital, Classic FM, Radio 3 or Radio 1 have all fallen significantly. Only Radio 2, chosen by 11 per cent, has retained a consistent level of listeners over that time. Not surprisingly, Radio 3 stands out among opera buffs: 22 per cent listen regularly. Those attending plays or dance are particularly likely to listen to Radio 4.

When it comes to planning trips to the theatre, it seems a majority make arrangements spontaneously. One in four theatre tickets in the West End are booked on the day of the performance, and almost half are booked in the week prior to the performance. This represents a shift towards late booking since 1997. Booking face-to-face or by phone are the most common approaches, with theatre box offices dealing with the majority of bookings. However, one in six West End tickets are now booked online.

When it comes to deciding which performances to attend, word of mouth is by far the most common factor influencing people, with 55 per cent of visitors citing it. The press – through advertising, reviews or features – and posters are mentioned by 29 per cent and 26 per cent respectively. As with ticket purchasing, however, the internet has emerged as a strong player and is playing an increasingly important role in marketing the theatre.