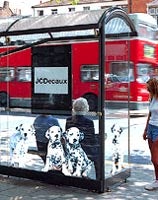 When French poster giant JC Decaux acquired the British outdoor company Mills &amp; Allen early last year, it claimed it would keep the M&A brand name, which is featured on 12,600 poster sites around the UK.

A year on, and Decaux has made a U-turn. It is planning to rebrand M&A’s billboards with its own name and replace some of the wooden boards with higher-quality steel ones.

Although the company is unlikely to put up new billboards at each of its sites, the change could mark the end of wooden billboards and lead the way for the rest of the UK market to follow suit.

The upshot of Decaux’s plans will be that the majority of billboards in the UK will loose their trademark of the past ten years – the green boundary – and the 35-year-old name of Mills &amp; Allen will disappear. Claims that M&A is a well-respected brand, have fallen on deaf ears at Decaux.

The company says its decision to rebrand all of its sites in the UK and Ireland and upgrade many of them at the same time, is largely to take some of the confusion out of the market – and not an excuse to hike its ratecard, which some have suggested is the contractor’s real motive.

The company has just delayed its public offering in France, so the rebrand may not exactly be a coincidence. The company will be seeking to convince analysts of its consistency. Jeremy Male, JC Decaux’s chief executive for Northern Europe, says: “When you look back to the acquisition of Avenir (M&A’s parent company) and see all that has happened since, there is no doubt that Decaux was going to be the brand as the public entity. We think this [the rebrand] reflects the investment we have made in the market.”

Apart from ditching the name and the green borders in favour of something “more in keeping” with the French company’s style, Decaux also plans to cull some of its sites.

Male seems unconcerned that another contractor could move in to take over his sites. “There is more to life than the number of sites we have. I’m more concerned with quality,” he says.

Decaux is a company that is continually championing the case for high quality in outdoor advertising. It has, for example, employed the services of renowned architect Norman Foster to design bus-shelters and its new scrolling 48-sheets.

At the time of the Avenir acquisition, Jean-FranÃÂ§ois Decaux, global chief executive and son of the company’s founder, Jean-Claude, said he would be investing £50m in billboards over the next five years.

So far, Decaux has mainly focused on putting up scrolling 48-sheets, and increasing illumination on other existing sites. The company claims 85 per cent of its 96-sheets and 40 per cent of its 48-sheets are now illuminated. Male says he hopes to increase the 48-sheet figure to 50 per cent over the next year.

The rebranding does not include Avenir in France – the company that bought M&A ten years ago and painted all its billboards green. “We will just rebrand where it makes sense,” says Male. “Mills &amp; Allen is associated with billboards – the Decaux brand is better suited to what we are doing in the UK.”

Male claims Decaux is trying to create a new high-quality medium, instead of running a billboard company: “I think what we are planning says how passionate Decaux is about outdoor.”

Male is not unsympathetic to poster specialists and some advertisers’ concerns over the loss of the M&A brand, but says: “Green is going. This is because green means something. It means billboards. It doesn’t mean this wasn’t something good – but business should be metamorphosing and change is a good thing.”

If Decaux is really serious about its planned upgrade, and if its upgrade is on the scale Male would have us believe, then other outdoor companies will have to follow suit.

Stevie Spring, chief executive of rival More Group, says: “I do know that any improvement carried out whether it is done by us or one of our competitors is fantastic for the outdoor business”.

Whatever Spring claims to feel about Decaux’s plans, competition is still competition and it will come down to deep pockets. She says More’s sites have been upgraded recently, and adds: “The concentration of the medium means media owners (such as ourselves and Decaux), are spending a fortune on upgrading.”

Male says there will be “no problem” finding the money to fund the rebranding even though Decaux put itself in debt for the first time when it acquired Avenir, and has yet to benefit from money made through a public offering.

Decaux will not now be floating until at least April. By coincidence, Male says the official launch of the rebrand is not until April. This suggests Decaux will use the proceeds of the float to fund the rebranding.

It is also likely to mean that there will be little movement before April. Advertisers can expect to see the prices they pay for posters creeping up as they are forced to pay for upgrading the stock, but they may find the quality of the sites vastly improved.