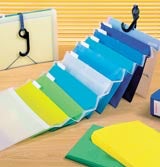 Thenetworkone, which custom-builds international independent agency networks for clients, has won the global account for office supplies company Esselte. The business is worth more than &£25m.

This is the first win for London-based thenetworkone and it will now line up independent creative agencies across dozens of territories to work on Esselte’s brands.

Esselte, a US-based company with a $1.1bn (&£682m) turnover, intends to make its brands more consumer-facing. It recently appointed Helena Wong, a former PepsiCo and Procter &amp; Gamble senior marketer, to the position of global chief marketing officer. Television, print and outdoor campaigns will be developed.

In the UK its best-known brand is Dymo, the label-making and labelwriting system. Other Esselte brands include Leitz and Pendaflex. These include products such as lever-arch files, desk accessories and ring binders distributed via retailers such as Rymans and Staples.

Initially the Esselte campaign will be developed for America, Germany, the Netherlands and Hong Kong and China. It will roll out to other territories, but thenetworkone has yet to decide which agencies to work with in the UK. It is believed to have held discussions with Soul and Vallance Carruthers Coleman Priest.

Thenetworkone was set up at the end of last year by four international advertising executives. President Julian Boulding, a former global account director at D’Arcy, describes it as a “management system” and says that it differs from an international affiliate network because its roster is not fixed – agencies are brought on board on a project-by-project basis.