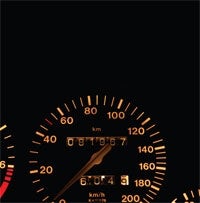 When Marketing Week carried out its last Email Attitudes Research survey in October 2010, one of the biggest challenges cited by respondents was information overload.

Consumers were being targeted with marketing messages via an increasing number of digital channels, not least social media. Would it signal the death of email?

This year’s survey, nearly a year on, shows that consumers are willing to receive a greater volume of email communication perhaps due to more effective spam filters and better targeting. Consequently, obtaining and managing data in order to target effectively has emerged as a major challenge for marketers, but for those who get it right, the rewards could be huge.

Despite last year’s concerns about overwhelming consumers with email marketing, prompting ’email blindness’, a significant 70% of respondents say they have sent a greater volume of emails over the past 12 months, with 44% of respondents seeing better open rates. An additional 45% have seen click-through rates (CTR) increase. Of course, this reflects the philosophy seen in every other marketing channel that greater activity reaps greater results and it is encouraging to see it borne out in the email space.

The trend has also been demonstrated across all age groups, despite concerns emerging in last year’s survey that the younger demographic would use email less as social networking sites such as Facebook and Twitter became their primary means of communication.
Nearly half the respondents to this year’s survey market to the 18-24 age group using email, and 33% say open rates have increased among this audience a trend that is consistent with other age groups.

However, reaching this market remains a concern. One marketing manager from the hospitality industry cites “relevance to young adult target audience” as the biggest future challenge to the integration of email with other marketing channels, while a product manager from a digital marketing company says “email is getting more and more old-fashioned people are Skyping or IMing these days.”

A CRM systems officer in the education sector said: “Emails will be opened up less by the youth market as they are finding new channels to explore.” However, figures have yet to support these concerns.

In recognition of the ubiquity of social media across an ever wider demographic, over 60% of respondents now use sharing options such as Facebook and Twitter in their email an increase of more than 12% since October 2010.

The relationship between email and social media is widely predicted to grow. The managing director of a consumer goods firm forecasts that we will see more companies reaching out to younger age groups “through increased use of social sharing”, while a marketing manager in the utilities sector cites “integration with social media and introducing ’conversations’ between members of email lists on Twitter etc” as an important trend for the coming 12 months.

Social media integration is also cited as a hot trend by marketing managers in the retail, transport and not-for-profit sectors.

Others are more sceptical about the continued appeal of social media, with a marketing manager in the manufacturing industry suggesting that “there may be a return to more targeted email campaigns as a result of people becoming disillusioned with social media, such as Twitter, due to its over-use.”

A respondent from the education sector also suggests that Facebook had already reached “boredom level”, while a marketing manager from the gift industry claims his company is thinking about embracing Google+, suggesting this “may be the new Facebook”. Others believe that social media is not being harnessed enough, with a marketing manager in the retail sector suggesting that email service providers need to improve their functionality to allow better social media sharing.

Last year, only 46% of respondents measured the effect of their email campaigns on other marketing channels, so this figure has crept up slightly, but it still leaves a sizeable 26% more than a fifth who don’t have any mechanism in place for recording this.

This is perhaps due to larger companies working in silos, making it resource-intensive and technically difficult to pull data together from offline and online marketing campaigns. This is supported by only 62% of respondents saying that they share data from email campaigns with their marketing department and other departments up just 2% from last year.

A communications executive in the not-for-profit sector suggests that “timing with other people responsible for offline channels” and “visibility of what each area is doing” needs greater alignment to achieve integration with other online and offline marketing channels going forward, while a managing director in consumer goods claims their company’s “system’s restrictions” were the greatest obstacle.

Mobile is also cited as both a challenge and a trend due to changing consumer behaviour. One marketing manager in the not-for-profit sector comments that “email needs to be relevant enough to warrant a second view after an initial quick open on a smartphone, to convince the user it is worth revisiting rather than deleting”, while others cite mobile optimisation as a growing trend.

Despite personalisation being cited frequently by respondents as a trend within email marketing over the next 12 months from the not-for-profit to retail and technology sectors and segmentation also being mentioned by numerous respondents ranging from the telecoms to financial industries, the number of segments used by marketers within email marketing has not increased since last year.

While 18% of respondents use no segmentation, 49% use two to three segments, reflecting last year’s figures. A similar percentage to last year 44% also believe that the results “didn’t justify” greater segmentation.

This figure may reflect the limitations within segmentation itself with segments being largely limited to either demographics or events (for example, actions consumers have taken) but many companies still maintain that using a greater number of segments will be a growing trend.

One business development manager in the not-for-profit sector predicts that email marketing will involve increasingly high levels of segmentation and greater “tailoring to the recipient”. Another respondent expects to see “greater data segmentation to achieve greater personalisation”, while a head of marketing within the retail industry says increased segmentation would be adopted “to get better results for organisation’s budgets”.

Data capture and management is key to personalisation and segmentation and this is also highlighted as a considerable challenge to the integration of email with other marketing channels.

One marketing manager from the media sector claims the biggest test was “having live, reliable, up-to-date data so that the right people receive the right email depending on how we have previously communicated with the recipients”, while a brand manager in the chemicals industry cites “gathering new data and opportunities to do so” as a difficulty.

A respondent from the not-for-profit sector adds that finding “time to analyse data” was also a key challenge.

Over half of respondents expect to increase their email marketing spend over the coming year, with 18% feeling “very optimistic” about business in the next 12 months and 54% feeling “fairly optimistic”.

Email might be a relative veteran of digital marketing but it is still maturing.

70% of respondents have sent a greater volume of emails over the past 12 months than previously.

44% of respondents have seen an increase in open rates, and an even greater percentage have seen click-through rates (CTR) increase in the past 12 months.

33% say open rates have increased among emails to the 18-24 age audience.

49% use two to three segments in their email marketing. 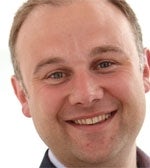 For some time, people have been saying that email is commoditised or in decline, but in fact it’s growing and evolving. This survey shows that marketers are sending more emails and that results are generally improving.

We’ve heard a lot about young people abandoning email, but that’s not apparent in these results. Our own research earlier this year found that 55% of 15to 24-year-olds are more likely to subscribe to emails to get deals from brands than to use other channels, such as ’liking’ them on Facebook.

People don’t convert from Facebook; the number-one channel for conversion is email, while Facebook is great to drive people to a channel where they do convert.

But we shouldn’t get complacent about the numbers because the personalities involved are also important. The number of people who follow brands on Twitter is tiny compared to those who sign up to brand emails, but they are very influential. It’s imperative to know if anyone on your email list is influential on Twitter; if so, you should be communicating with them differently, since their experience will be amplified through social channels.

When considering cross-channel integration, customer data requires careful thought. An example is how CRM is integrating with social media. How do we ensure front-line staff talking to customers through social media have the details of the people they’re talking to, including all their past interactions with the company? Sharing this data across the business allows it to be fed into the segmentation strategy.

It’s interesting how this survey shows a low use of segmentation. We’re seeing rapid evolution in this space as marketers move towards a more one-to-one personalisation strategy that allows successful segmentation methodology to permeate every touchpoint with the customer.

Aggregation of data in a digital marketing-ready environment is driving this evolution. Data can be made available from other channels, such as web analytics, CRM, transactional data and product information. This can be a big challenge, both in data aggregation and data management, but it’s worth the effort as improved relevancy drives conversions.

Extending this personalisation logic to a range of cross-channel communications can further increase conversions and moves us closer to a truly one-to-one customer relationship. 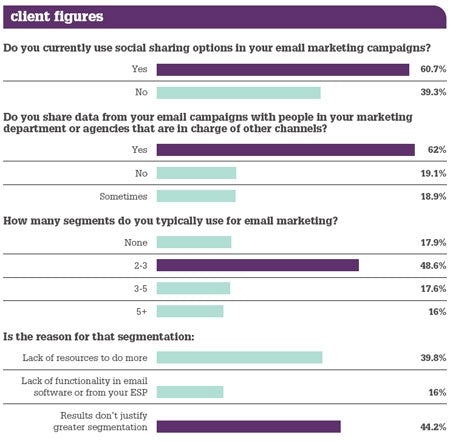 Real-time bidding is set to revolutionise not only how media is purchased, but how campaigns are planned and created and even the skills marketers need. 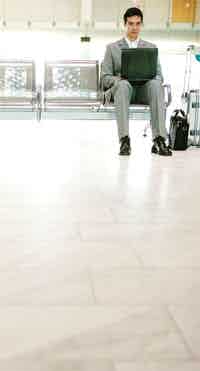 If there’s one thing that comes through very clearly in this edition of Digital Strategy, it’s that a siloed approach to media channels is no longer tenable.