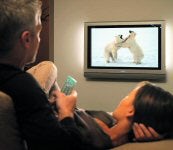 TV advertising has hit record viewing levels, confounding predictions that the medium is doomed, according to television marketing body Thinkbox.

TV ads are viewed about 2 billion times each day in the UK, which is an all-time high.

A Thinkbox spokeswoman says: “We are watching more commercial television advertising than ever before.”

The body says BARB data for 2006 shows commercial impacts – which measure one member of a target audience viewing one commercial – have increased 1% on 2005.

Thinkbox chief executive Tess Alps also predicts that impacts will continue to rise each year until 2012. She says the BARB data disproves the theory that increasing use of new TV technologies such as mobile and broadband, and viewing via personal video recorders (PVRs) will damage broadcast TV advertising.

Thinkbox says the BARB figures also indicate that 16to 24-year-olds increased their viewing of ads by 3.8% in 2006 “despite negative reports and predictions about TV viewing among youth audiences”. Meanwhile, ABC1 adult impacts grew by 0.6%, and housewives with children by 0.9%.

Growth has been driven by the switch to all forms of digital multi-channel TV, which 73.3% of UK homes have. Alps says the increases should “reassure” advertisers of the appeal and resilience of live broadcasting in the face of reports that TV would lose out to media such as the internet.

She says: “The commercial cake is still growing and we should not be surprised that analogue channels are losing share.” This loss of share, particularly by the non-commercial BBC channels, leads to her prediction that impacts will increase each year until 2012.

The BARB figures do not include television viewing via PVRs, which are in 8% of homes, or over mobile and broadband.

Virgin Media is launching its first branded television channel, Virgin Central, along with a host of new services to mark its rebrand from NTL:Telewest. The cable giant, which officially relaunches today, says the free Virgin Central is a “revolutionary” on-demand entertainment channel, which allows viewers to stop, rewind and pause content. Programmes will include West […]

EdwardsGroomSaunders (EGS) has won the media planning task for Russia’s biggest savoury snack brand BeerKa ahead of its UK launch. EGS won the business – understood to be worth up to £2m – after pitching against MediaVest Manchester. Brand owner Sibirsky Bereg, which has more than 15% of the Russian savoury snack market – ahead […]

Media agency PHD has parted company with the BBC after failing to make the shortlist on its £20m media planning and buying account. The agency has handled the business for more than 10 years. MPG, ZenithOptimedia and Mediaedge:CIA have made the shortlist. Carat was also cut from the list following chemistry meetings. The winning agency […]