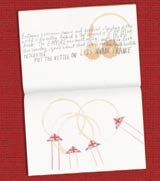 Creatives are, almost by definition, bored. No one understands them, you see – they are free spirits, unable to tolerate being tied down, day after day, on the Dunlop Inner Tubes account. So HHCL/Red Cell has given its ideas people a little exercise to keep them from getting fidgety.

Staff have been allowed to let their imaginations run free on a selection of brands, in an “if I ruled the world” manner, and the results have been collected in a book, called There’s What Is… and There’s What If.

Among the Diary’s favourite new taglines are: “Tetley Tea. Put the kettle on. Let’s invade France”; and “Naff off to Blackpool”.

But how’s about a new slogan for the agency? Something along the lines of: “We do this sort of thing in our own time, not yours… honest.”