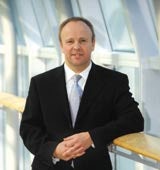 Despite having lost out to Willie Walsh for the top job, BA’s senior marketer has a seat on the board and a formidable power base. Even BA’s restive staff like him, says Jonathan Harwood

It seems a paradox that British Airways commercial director Martin George should be described as more of a salesman than a “natural marketer”, when he has made marketing pivotal to the airline’s recovery.

George’s careful stewardship of the marketing department, and his promise to focus relentlessly on giving BA’s regular customers exactly what they want, have drawn comparisons with Tesco marketing chief and board member Tim Mason. Now George aims to create a culture akin to the retail giant, where “the little things matter as much as the big things”.

It has been a busy few months for George. Besides the furore over the airline’s advertising review, with M&amp;C Saatchi finally dethroned by Bartle Bogle Hegarty (MW October 13), George has seen the arrival of a new boss, chief executive Willie Walsh. He has also assumed control of BA’s cabin crew and its troubled catering operation.

In July, George was elevated to the board of directors, joining an elite group of marketers who have made it into the boardroom to take on general management roles.

Despite his success in climbing the corporate ladder, George failed to land BA’s top job earlier this year, missing out to former Aer Lingus boss Walsh. But now he is firmly established among the top brass, it looks as though George is intent on using his influence to shape the airline.

Some see the end of the relationship with the Saatchi brothers as proof that George wants to do things his way. It is rumoured he backed BBH in 1995, only to see M&amp;C Saatchi snatch the contract at the last minute. Sources suggest that this time he wanted to end the agency’s high-profile relationship with the airline.

Whatever the motivation behind the appointment of BBH, George wants to bring a more egalitarian approach to the airline, an aim perhaps befitting a man with a lifelong passion for York City Football Club.

George joined BA from Cadbury in 1987, aged 25. “I was one of a group of people who came from packaged goods companies and combined with people who had been around the airline to create a new brand,” he says. He rose through the ranks, becoming commercial director in 2004.

Since then, observers say he has worked to bring marketing under the direct control of head office rather than the regions. In his new role, George is responsible for half of BA’s 40,000 staff and a budget of &£2bn – a third of the company’s expenditure. Since 2001, he and his team have turned BA’s fortunes around, making it the world’s most profitable airline – if not its favourite.

Central to the strategy has been the battle with the low-cost carriers. JP Morgan airline analyst Chris Avery says that BA’s reaction has become the “textbook” response – protecting its core business-class market, while also learning from low-cost rivals by offering cheap online deals.

George is keen on the internet, viewing it as a tool not only for selling but also for servicing customers. He explains that when customers can check in, pay for excess baggage, order meals and change their seats on the Web, airport staff will be free to resolve problems and “offer a genuine service”.

A desire to appeal to regular customers is reflected in the theme of the recent advertising pitch – “thought-through” service. “The impression that we could have created [with our past advertising] is that we were less interested in economy, but the vast majority of our customers are in economy,” George says. He explains that he wants to make customers aware “that we have really thought through what they are looking for and what they are prepared to pay for”.

These are the aspirations that have attracted comparisons with Tesco. He is perhaps a lower-profile figure than Mason, but he is still a “significant presence” in the marketing world, according to one source. He has held the chairmanship of the Marketing Group of Great Britain, is actively involved with the charity Help a London Child and sits on the board of chilled convenience food group Uniq.

“I do have a lower profile than some people,” he admits, citing the amount of travelling he does as one reason. “When I am in the UK, I am generally at BA, or trying to catch up with family or friends,” he says. He recently resigned from the board of VisitBritain because of “time pressure”.

George is keen to press for recognition of marketing as an important part of BA. “Marketers need to show that we are businesspeople, and that there is a correlation between what we do and the financial health of the business,” he says. “Our function is to ensure that the consumer is front and centre in the corporation’s mind. That’s not a change from where we have been before, but it is great to personally represent marketing at board level.”

Mark Waugh, deputy managing director of BA’s media agency, Zenith Optimedia, says George’s added role of overseeing cabin crew and catering is significant, as he is now in charge of customer and staff touch-points. “He has a big responsibility under Walsh, and some of that limelight could rub off, even though he doesn’t court it,” Waugh says.

But one aviation analyst predicts turbulence and describes Walsh and George as “very different people”, suggesting that their relationship could be “one to watch”. George demurs: he is “delighted” to be working with Walsh, although he seems to concede that marketers are not equipped to run large companies. “Walsh is a chief executive with a proven track record, and for a job of the scale of BA you want someone with experience – so it was a wise move,” he says.

Another reason he may have missed out on the top job is, paradoxically, his popularity among BA staff, who are famously loyal to him. He is popular throughout the industry, and few, if any, observers have a bad word to say about him. But he rejects the allegation that he is too nice: “I have to take difficult decisions, and people who have worked closely with me have seen me make them. The area that I was responsible for had 770 people before September 11. Within two years, we had 370.”

Haystack Group founder and managing partner Suki Thompson agrees that George might not be as cuddly as he appears. “He has stuck at it and has been both lucky and smart,” she says. “A lot of very good marketers have left BA in the past. Anyone who has survived a corporate climate like that has to be pretty hard.”

Thompson also says that George’s loyalty and long service will benefit the company. She concludes: “If we had more clients like him who stayed in their jobs, life would be a lot easier for us – and brands would be a lot better.” â¢”