I have previously, foolishly, fallen into the trap of calling something “viral” when really, it’s an online campaign that the creators hope will go viral.

There can be no mistake that this activity from Warner Bros. to promote the launch of upcoming film Contagion, is a truly viral campaign.

Possibly not in the way you think. It’s a bit more gross than that.

The film sees Matt Damon, Kate Winslet and Jude Law, battle a lethal airborne virus that travels around the world wiping out almost everyone in its path.

Ahead of the opening of the film in Canada, Warner Bros. rented out an empty storefront in Toronto and infected two large Petri dishes with live bacteria that over the course of a week grew to read “Contagion” in coloured mould.

Of course Warner Bros. filmed the whole project and now more than 160,000 people have watched it on YouTube.

The film opens in the UK next month, and hopefully a similar stunt will be growing somewhere nearby.

Warner Bros. has worked with Curb, an agency that uses natural and sustainable materials, on this.

As an Aside, Curb is also working with Clear Channel outdoor in the UK on a number of creative projects that could see all kinds of brands using the unusual media to create interesting, growing elements, to campaigns.

Is it gross? yes, but is it unusual and clever, and do consumers engage with it? yes. I’m hoping to see a few more brands looking at ways to use natural media in their campaigns to create something really special. 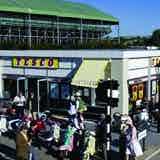