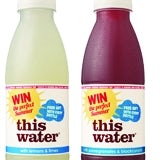 This Water will roll out Facebook and Twitter activity for the first time for its “win the perfect summer” competition.

The campaign will also include on pack promotion, where every bottle of the drink wins a prize.

Prizes range from tickets to festivals, Puma merchandise and a VW Campervan.

This Water marketing manager Sarah Smart says: “The brand has low penetration at the moment so this campaign presents a huge opportunity to attract people on shelf with an attractive on-pack promotion to get people trying our drinks.”

The fruit drink brand is partnering with WH Smith for POS and window displays to promote the competition.

The “water plus” category grew 5% in 2010, largely fuelled by This Water and Coca-Cola-owned Glaceau Vitamin Water, which together contributed 88% to the growth of the sector.

Coca-Cola owns a 58% majority stake in Innocent, although Smart says the two water plus brands are not in conflict because This Water focuses on natural refreshment whereas Vitaminwater is more functional.