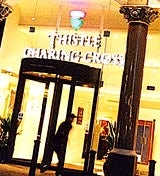 Burton replaces Tony Dangerfield, who has been promoted to operations director for the southern area.

Reporting to chief executive Stuart Burnett, Burton will be responsible for all UK and international marketing for the group, which has 56 four-star hotels across the UK.

“The group has made a significant investment in renovating and upgrading its properties and has a superb portfolio of hotels,” says Burton.

His appointment comes as Thistle prepares to roll out a series of designer restaurants serving food prepared by top London chefs, following the success of a trial site at its hotel near Victoria Station.

The group is also developing its own restaurant brands – Gengis, serving Asian food, and Mediterranean restaurant Faya – which will be rolled out in hotels outside the capital.

The group, which last month reported pre-tax profits of £68.2m for the 53 weeks to December 31, will this summer complete a three-year refurbishment programme.

Last November, Thistle Hotels hired Organic Inc to develop an online campaign and encourage customers to book through the Internet.