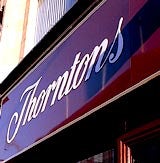 Thorntons is looking for a marketing director following the departure of Helen Wilcox.

Reports suggested Wilcox and Mounsey were made redundant but the company says the pair left by mutual consent. Neither has a job to go to and both were unavailable for comment as Marketing Week went to press.

A spokeswoman says: “Wilcox and Mounsey have decided to pursue new directions in their careers.

“Thorntons has already started to look for replacements and is very pleased with the quality of candidates being shortlisted.”

For the time being, chief executive Peter Burdon is overseeing marketing, while operations director Peter Baldwin will take responsibility for retail.

Burdon adds: “The company is confident these changes will continue to keep Thorntons on track for sustained profitable growth.”

Wilcox joined Thorntons in January last year, having previously been a marketer at Asda. She oversaw the appointment of Miles Calcraft Briginshaw Duffy to the company’s &£4m creative account in August last year, after Thorntons parted company with incumbent Rainey Kelly Campbell Roalfe/Y&R.

Reebok is to launch its first virtual shop at www.reebok.co.uk in partnership with online retailer Kitbag.com. The store will open in June and will be be the sportswear brand’s e-commerce debut. The store will sell Reebok products rarely found on the high street. These include an exclusive range for the online store and imported US […]

I am writing in response to Sean Brierley’s piece “It’s time brands stood down from the moral high ground”. While Brierley correctly identifies the increased scrutiny placed on brandsÃ­ ethical policies and the often inadequate responses that cause-related marketing offers, his conclusion – that brands should therefore not concern themselves with ethics – smacks of […]

StepStone, the online recruitment website, has renewed its Â£4m sponsorship of Channel 4’s sports programming for a second year.