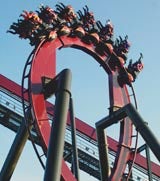 Thorpe Park, owned by the Tussauds Group, is looking for a headline sponsor for its new thrill ride, Nemesis Inferno.

Nemesis Inferno is a suspended roller-coaster ride in which passengers will travel with their legs dangling and feet free. It is themed as a ride through a volcano and reaches a top speed of 77km an hour

Thorpe Park opened for the season on April 5 and has yet to find a sponsor for the ride.

Group commercial sponsorship manager Adrian Jones is looking for a six-figure investment for a package, which could include title sponsorship, signage, incorporation into the ride and presence in the gift shops.

He says that the delay in finding a sponsor is due to the nature of thrill rides, as such attractions rely on the integrity of their name for success, and the wrong sponsor could send the wrong message.

The only sponsor-titled ride at Thorpe Park at present is the Ribena Rhumba Rapids.

Jones has brokered deals worth about £2m with new preferred partners for Tussauds’ attractions this season. These include Peugeot, United Biscuits’ McVities and KP brands and Birds Eye Wall’s. Peugeot will use the partnership to promote its 307 SW model in the summer.