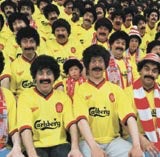 Those of you confused by the Geordie ravings in the Big Brother story above will be heartened to know that you’re not the only ones who don’t appreciate England’s wide diversity of regional accents. A survey of executives, carried out by the Aziz Corporation, has revealed that while businessmen with American or Home Counties accents were perceived as successful, and Scottish-sounding people were seen as hard-working and honest, only eight per cent of company directors thought they could trust a Scouser. Brummies and those from the West Country also scored poorly, but continental Europeans, while being seen as successful, were also thought of as lazy. The Diary, of course, speaks in impeccable RP – and is as lazy, dishonest and unsuccessful as only a toff can be.

Mochi ice cream brand Little Moons may has taken its marketing strategy to the next level since it went viral on TikTok earlier this year, but that does not mean the business is “walking away from digital”.