Adidas shares rose 5.4% to €88.52 following the announcement, with the brand calling Rorsted the “perfect candidate” to help Adidas grow its profitability.

The current Adidas CEO, Herbert Hainer, will leave at the end of September, six months before his contract was due to end. And Adidas have thanked him for doing a “tremendous job” in helping grow market value from €3bn to €18bn over his 14-year tenure as chief executive.

Yet despite a glowing reference from Adidas, outgoing CEO Hainer has failed to maintain its strong position in the US market. The German sports brand has lost ground in North America to its biggest rival Nike as well as newcomer Under Armour, with Adidas currently only the third biggest sports brand in the US.

Here are three ways Rorsted can put the Adidas brand back on track.

To return Adidas to past glories, Rorsted will first need to rethink its marketing strategy according to Tim Crow, CEO of Synergy Sponsorship.

But Crow doubts whether this strategy will truly help it to close the gap with rival Nike.

“You have to question the logic behind some of this city-focused stuff as global distribution is one of the biggest reasons Nike outperforms Adidas,” says Crow.

“Concentrating on big cities and creating a ‘new marketing organisation’ is a good sound bite but whether it truly works to drive profitability – which is the main reason Rorsted has been brought in, his skills at driving the bottom line – is another question. I imagine come October, Rorsted will take a long hard look and set out to review the marketing strategy altogether.”

Despite lucrative shirt sponsorship deals with sports brands such as Manchester United, Adidas no longer has a monopoly on big names.

And sports sponsorship consultant Nigel Currie says Adidas must start to learn lessons from its challengers such as Under Armour and New Balance.

“The biggest challenge is the number of new players suddenly coming into the sports clothing/footwear manufacturing space,” he says.

“For years Adidas and Nike between them had the top sportsmen and women and teams all round the world on their books, but not any more – just look at the likes of Novak Djokovic and Andy Murray. New brands are appearing all the time, which don’t just have fresh names but are also modern, trendy and sometimes slightly wacky and unusual.”

Currie says the Adidas brand must aim to become more ‘street’ or risk losing touch with the next generation.

He adds: “The challenge for Adidas in particular is to become a bit more street and youthful and appeal to the next generation.  If they don’t they will start to lose market share as sport continues to become more exciting and more showbizzy in its approach and presentation.”

Winning back dominance in the US

Despite shareholder angst, Hainer’s turnaround plan appears to be taking shape, with Adidas growing sales by 13% in its third quarter. As a result, Adidas expects profits to have increased by 10% in 2015.

However its operating margin is still around half that of Nike and Crow says many investors have cold feet.

“If you’re an Adidas investor, the number one issue is still profitability, no question.”

“At Henkel, Rorsted did a great job of expanding into North America and was known as a profits driver, so Adidas are banking on his reputation as a brand builder.”

Key to growth in America will be ensuring Adidas chooses sponsorship deals that are right for the US market. And Crow questions, in particular, whether Adidas distancing itself from the NBA was the right decision.

He advises: “It is interesting to see how they have shaken up the portfolio. I’m surprised to see them go out of the NBA, especially given the ongoing poor performance of Adidas in the US.

“I expect Rorsted to review a lot of the existing sponsorships as these deals have to guarantee money going forward. Golf, for example, has been under a lot of pressure for some time now. So I’d expect to see Adidas making a lot of divestments and changes to the current portfolio.”

Adidas has appointed Roy Gardner in the newly created role of VP of brand activation management for Western Europe as the sports giant looks to build a ‘new European marketing organisation.’ 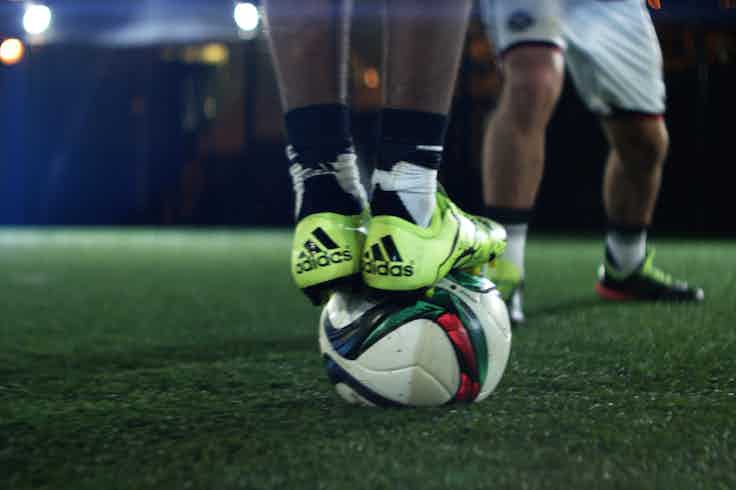 Adidas is planning to further its investment in marketing over the rest of the year, starting with a new campaign for its flagship Adidas brand dubbed “Create Your Game” as it looks to raise the visibility and reputation of its brands among both consumers and retailers and build on the success of its football business ahead of the Euro 2016 tournament next year.

After introducing its first global ad campaign earlier this month and launching its football business in March, Marketing Week caught up with New Balance’s head of global marketing Hilary Keates to hear how the brand’s evolution to focus on “athletes first” has led to 15% sales growth and what it plans to do next.