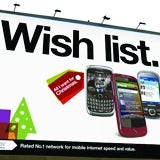 The mobile operator’s “All I want for Christmas” campaign targets gift recipients. It will include outdoor, print, online and point of sale activity.

The festive push follows the relaunch of its pay as you go packages earlier this year, which has seen Three add 2.7 million pre-pay customers to its base.

All of the main mobile operators are using the pre-Christmas spike in pay as you go sales to push their own “rewards” offerings.

Vodafone is currently pushing its pay as you go plans with a £10m pre-Christmas marketing campaign starring animated characters.

Following a relaunch of its PAYG ’animal’ packages earlier this year, Orange is continuing to promote its Phone Funds service, which sees £1 paid into a fund for every £10 topped up, which can be put to extra calls or a new handset. T-Mobile is also pushing pay as you go on its website with “deal of the day”.

All the major operators are now looking to smartphones and the accompanying data charges as key areas for revenue growth.

Vodafone said this week that data now equates to £5bn of its annual revenue, and is a major focus for its strategy going forward. The European data market is reportedly worth $57bn (£35.3bn).