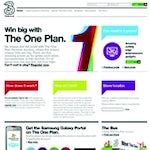 The six-week promotion, called ’The One Plan’ and due to start later this month, will encourage customers to enter an online “reverse auction” to win prizes including 3D televisions and £8,000 in cash. The winner will be the person with the lowest unique bid.

Consumers can enter the promotion, which runs from tomorrow (August 17) until September 26, by picking up an in-store leaflet containing a unique code that enables them to register online. Once registered, users can bid across each of the five weekly auctions.

The online promotion follows a press advertising campaign using the strapline: “Meet The One. The plan that’s going to change things. For everyone.”

Jolene Sickelmore, lead marketing communications manager, Three (Retail) said: “The One Plan is a really strong offering in a crowded market and Haygarth has created a promotional marketing solution that reflects the core characteristics of the new plan whilst offering a compelling reason for consumers to engage with the brand. The reverse auction concept – Bid Small and Win Big – is a perfect mechanic to offer consumers more for less, drive footfall and raise awareness of The One Plan.”

Three boasts that The One Plan is the simplest and most competitive tariff ever offered in the UK.

In June, Three called for a more standardised approach to measuring operators’ network coverage following a row between it and rival network Orange over the pair’s competing claims to have the UK’s largest 3G network.