M&S was also aided by a rise in online awareness and the continuing success of its food offer, with record Valentine’s Day trading helping total sales rise 3.7% – well above the market average.

Here are some of the ways marketing has helped M&S.

Although admitting ad spend was down in the second half of 2015, following a noticeable rise in the first half, Bolland insisted that M&S has been ‘getting more with less’. He said the Christmas and Spring campaigns were ‘bold creatives’ and is confident Easter activity will be successful.

The key to recent clothing success has been in the viral hype it generated for the much publicised M&S suede skirt, according to Anusha Couttigane, a senior consultant at Conlumino.

“The sharp use of celebrity endorsement and social media has helped to create hype around its much-lauded suede ‘skirt of the season’, she said.

“As images of style icons Alexa Chung and Olivia Palermo sporting the Autograph design continue to flood the internet, this is just the kind of buzz and energy that could see M&S return to fashion favour.”

The dress, with a price tag of £199 or £39.50 in a faux suede, has been successful in bringing in both ends of the market by not pricing everyone out of the item, according to Couttigane, who said there was evidence of a more flexible customer model across the brand.

In a call to analysts this morning, Bolland said the secret to M&S’ food success has been in tightly controlling its prices.

“It’s not about upselling or discounting, but innovation,” he said, claiming that the upmarket retailer’s promotional participation was 1% lower than the rest of the market, with the big four supermarkets heavily driving price reductions to counter the rise of Aldi and Lidl.

While M&S has been refreshing its stuttering clothing empire since 2010, food has become the crown in its jewel, with the success of its Dine In deals even impacting the dine out sector.

Bolland said there will now be a greater impetus on year-round innovation on food and its marketing.

“We want to innovate more outside of festive periods,” he added, pointing to M&S’ Taste of British Isles summer range and the addition of 300 new items this summer.

“At seasonal moments like summer, it isn’t a big occasion like Christmas, but a period where we can provide colour through innovation.”

He also said that M&S was making good progress on its target of 200 M&S Food convenience stores and that ‘being selective’ on locations, which include retail parks, was helping it avoid the mistakes of rivals and choose profitable sites.

After posting a £792m loss, Morrisons recently announced it would close 23 of its convenience stores and that the operation wasn’t succeeding due to bad locations.

Key to Bolland’s turnaround has been the transformation of M&S’s transactional website and for the latest quarter, sales were up 13.8%, following a difficult start after being relaunched in February.

The new-look website got off to a tricky start, with first half trading figures showing that sales were down 6.3%, while M&S has had to make a number of updates to the website, including improved navigation and display and a new guest checkout facility.

However, it appears to have turned the corner with traffic conversion and satisfaction all up across desktop, tablet and mobile, with mobile the strongest driver with conversion up 50%, for the latest period. Subscribers were also up 6% year on year.

Bolland said there are now daily, monthly and quarterly updates to site to improve navigation and speed, and was defiant on the website’s progress.

“M&S.com has returned to growth, as planned, with the website metrics including traffic, conversion and customer satisfaction continuing to improve,” he said. “We’re delighted with its progress and its impact on clothing.” 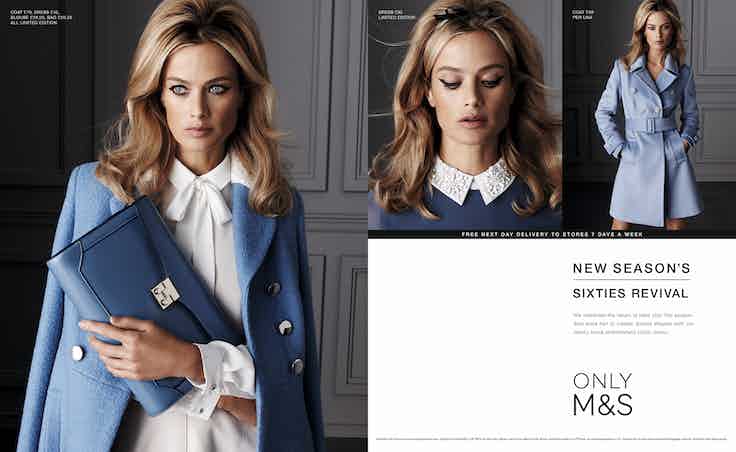