The reaction of analysts to Trinity Mirror’s decision to sell the Racing Post and some of its regional newspaper divisions has not made easy reading for Sly Bailey, the one-time media golden girl who rose from a junior advertising sales role to chief executive at IPC before moving to Trinity following the magazine publisher’s sale to AOL Time Warner.

“A company short on ideas”, says one analyst of Trinity Mirror. “Ducking the big decisions,” adds another. “Cowardly, uninspiring and unprogressive,” argues a third.

The move follows a four-month strategic review of the business to address tumbling advertising revenue and falling circulation at Trinity. Albeit rather late, Bailey is promising a fully integrated digital future for the remainder of the company’s portfolio, paid for with the capital expenditure saved on the titles being sold. The revenue from those sales will be split between shareholders and plugging part of the company’s pension deficits. The City however, was hoping for a break-up of the company with either the entire regional business, the national titles or the whole business sold to new management.

Analysts suggest now is the wrong time to be considering piecemeal sales in what is a cyclical market. Richard Hitchcock, media analyst at Numis Securities, says a demerger of Trinity Mirror’s regional titles from the national newspapers was prevented by tax and pension complexities but adds: “Selling the Racing Post and some of the regionals amounts to a rather disappointing halfway house of a decision. Sly should have kept everything together or sold everything off. If she’d kept her nerve a little longer, selling conditions may have improved.

“One wonders whether Trinity Mirror will find a buyer, especially for the regionals where all trade buyers are likely to look, but where Johnston Press currently has a stretched balance sheet and would have to use equity to make a move,” he adds. “Gannett is considering selling its own Newsquest titles and DMGT [Daily Mail & General Trust] failed to attract the price it wanted for its own regional newspapers earlier this year. We don’t expect a frenzied race to buy the assets on sale and the company will struggle to get its preferred price.” 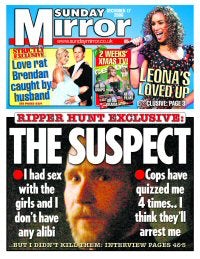 A question of value
One Trinity source says the company is looking for “northwards of £500m” for the regionals on offer as well as the Racing Post. The group’s national newspapers, The Daily Mirror, its Sunday sister title, The People, The Daily Record and The Sunday Mail are still powerful brands which earlier this year drew a £600m offer from entrepreneur Marcus Evans. The offer was rejected along with his argument that he could not meet the £700m asking price because he felt any new owner would need to further invest about £150m to settle pension deficits and to give the newspapers a good chance of growth. One industry source says: “Trinity Mirror has made its decision, but it needs to be careful that the nationals don’t continue to decline to the point where Evans returns with a smaller offer.”

In an exclusive interview with Marketing Week, Bailey says of the reaction to last week’s announcement: “I’d prefer people to be excited about what we’re doing, but any action must be underpinned by the rule that it is in the interest of shareholders. This was a comprehensive, pragmatic, management-led strategic review, all about setting up the business for the future.”

The “technology-led operating model” unveiled last week will make the company “one of the most efficient and modern media groups in Europe”, according to Bailey. It will also enable Trinity Mirror to develop as a multi-platform media provider, much as arch-rival News Group Newspapers, publisher of The Sun and News of the World, the Guardian and Telegraph media groups already do.

Looking to a digital future
“We did look at other publishers’ models for inspiration,” says Bailey, citing examples as diverse as The Boston Globe and free classified ad publication Friday-Ad. Although Bailey speaks enthusiastically about creating the company’s new digital operation within the next three years, she is unable to rule out job losses along the way.

She talks of “radical thinking”, refusing to rule out expanding the Trinity Mirror empire abroad, and the notion that customers and shareholders are at the forefront of what is about to be implemented. She also maintains, despite an 8.8% fall in her national titles’ ad revenue in the year to November, that Trinity’s newspaper business is in better health than others claim.

“The industry is starting to notice that The Daily Mirror sells 100% of its newspapers at full price. Our rivals all buy revenue with massive bulks at heavy discounts,” she says. “About a quarter of The Sun’s copies sell at a discount.”

Director of corporate communications Nick Fullagar adds: “We’re unlike any of the other newspaper publishers in that we are a pure play plc with no dominant shareholding family. It might seem distasteful to others but Trinity Mirror is a business and must be run as a business. That said, in terms of editorial excellence we led the news agenda several times in 2006 with [David] Beckham’s first interview after being dropped by England, John Prescott’s affair, the Craig Charles cocaine exclusive and Richard Hammond’s first interview following his accident among others. Where Piers Morgan confused consumers by constantly shifting the editorial goalposts, Richard Wallace’s editorship has provided us with the kind of consistency that made the Mail and the Sun, under Kelvin MacKenzie, so strong.”

Former Trinity Mirror managing director Roger Eastoe, now running his own strategic marketing business, is broadly supportive of Bailey but harbours concern about the company’s future. He says: “Trinity Mirror and specifically the Mirror titles have suffered from having had a series of owners. The market should not be overly critical of Sly – some of the problems date back to Reed International ownership 20 years ago. Sly has had a hell of a tough job and the market has, in many respects, moved against her and other publishers since she took the helm.

Private ownership problems
“The ownership issues of being a plc without being a dominant shareholder like News International and Associated should also not be underestimated. Sly has far less manoeuvrability than her competitors, which is a major factor in Trinity Mirror’s fortunes. On balance, though, I share the shareholders’ disappointment that no buyer has been found for the nationals and I hope that’s still a possibility. For the titles to have a chance they need to be run as a private business outside the public glare. If not I fear the titles’ value in the market will fall further as they continue to compete with one arm tied behind their back.”

This is one of several questions the Trinity Mirror board must ask itself on behalf of the shareholders. Speculation elsewhere in the industry is that time is running out for Bailey. However, with a confident twinkle in her eye, she offers one enigmatic comment: “I’m sorry to have disappointed people but my job is to deliver value, not fireworks. We’re going to surprise people, just watch us.”

Collaborating on an account can benefit all parties involved, but there’s no room for big egos, and the client’s needs are paramount, says Alex Shephard

Lucrative sponsorship deals between Premier League football clubs and online gaming companies in the UK could become a thing of the past after the Gambling Commission last week confirmed it would investigate whether the partnerships encouraged children to gamble. The commission will explore whether new laws, set to come into force next September under the […]

This Christmas more people than ever will use the internet to buy presents but, as the Web grows in popularity, pro-active high street retailers are learning that they can’t succeed both on- and offline.