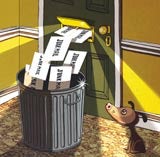 Direct marketing may not be the most popular method of advertising among consumers, but the ‘junk mail’ industry has more than doubled in size over the last decade. So how does this medium continue to thrive? By Richard West

The term “junk mail” may not be used much in marketing circles, but consumers use it all the time. Unfortunately for those sending it, they use “junk” not just as an adjective, but as a verb to describe what they intend to do with the mail instead of opening it.

Last year the direct marketing industry achieved a milestone of dubious distinction. The number of direct mail items posted exceeded 10 billion for the first time. This works out at about three items a week for every person in Britain. While the rest of the advertising community has been busy tightening belts, direct mail has more than doubled in size and value in a decade.

According to the Direct Mail Information Service, the total number of addressed direct mail items in 2002 rose to 5.2 billion – an increase of 130 per cent since 1990. In addition, it’s reckoned nearly 5 billion unaddressed items, such as leaflets and fliers, were also posted.

Even though a recent Mori poll found that 36 per cent of consumers throw it straight in the bin, direct mail somehow manages to provide a respectable return on investment. In terms of media expenditure, it accounts for &£2.4bn. Yet last year it generated &£25.1bn in new business – a ratio of more than 10:1, with the average consumer spending more than &£500 a year as a result of direct marketing. So, how can the contradiction of a medium that inspires such strong negative and positive responses be explained?

Relatively speaking, direct marketing is still in its adolescence. Twenty years ago the activity amounted to early pioneers such as The Readers’ Digest sending out letters to addresses given to them by Rolodex. Today, it is an established multi-billion pound industry.

David Cole, managing director of CCB-Profits from Data, has worked in direct marketing for about 20 years and believes that the industry’s gurus and visionaries are generally five years ahead of what’s really happening. He says: “One would have expected the brave new world of data-driven everything to have delivered the capability for all marketers to conduct one-to-one communication, in real-time, with all their customers, and use only carefully targeted databases. But this is not the case. While strategies such as accountable deployment of media, reduced cost per acquired customer and lifetime values are as solid as ever, the operational industry has let us down badly.”

The economic uncertainty of the past few years has forced marketing managers to scrutinise their budgets – and the return they achieve on investments – more closely. Many have shifted their above-the-line funds to response-driven marketing campaigns because these are seen as a more cost-effective and measurable way of gaining new customers.

At the same time, however, in an industry where clients are used to paying list brokers and agencies about &£100 for 1,000 names, those financial pressures make it difficult to justify paying over the odds for targeted, high performing data, which in some exclusive cases can reach &£10 per name.

There are two main reasons for this. First, it is easy to identify the price of a list on a budget sheet. That means it inevitably comes under scrutiny. Second, for all the developments in software and data management, targeting remains a very unpredictable science. Clean, current data may be the backbone to any successful direct marketing campaign, but expensive data doesn’t always perform to expectation.

“The process isn’t always a logical one,” says Gerry Scott, managing director of HLB. “You can’t say that a list costing above market price will perform well. There are all sorts of variables. How are consumers influenced by the proposition? How active are they with the brand? You have to establish the real value through testing,” she adds.

Bespoke data may be justifiable when it comes to luxury or exclusive products, but for the more mundane, mass-market items like window replacement and insurance, it is difficult to imagine droves of brand owners switching to premium data. For the big customer acquisition programmes that already target millions of households through various lifestyle databases and the electoral roll, it is doubtful whether there would be much incremental benefit in spending a fortune on bespoke data.

However, it’s not only “Angry from Tunbridge Wells” who is agitated by the mass volume mindset. John Regan, business development director at EHS Brann Discovery, thinks that companies will need to reappraise their attitude towards data if the direct mail and list industries are to have any sort of future. He says: “Consumers are becoming cynical. At the same time, there’s been a rapid decline in cold mailing response rates. This, coupled with the quality of data and shortage of new names, demands a shift in focus from lists and names to a more holistic approach to data.”

He believes that those who continue to push for big volumes will choke the industry to death, if a consumer backlash doesn’t hasten a speedier demise. He adds: “The future is true information-driven marketing. Direct mail needs to be targeted and marketers need to work out what switches people on. The industry increasingly demands a full service offering and in ten years there won’t be any agencies left that haven’t put data at the heart of their offering.”

Putting direct mail to the test

Cole agrees that the industry needs to change and rethink its values. “Direct mail’s main benefit is its accountability, because it can be easily tested. This is as important now as it was 20 years ago. Unfortunately, there are too many direct marketing-based companies with a vested interest in the status quo of mass mailing, because they are part of groups which also own printers, mailing houses, call centres or list broking divisions, all of which crave volume. Without this ‘self generated’ volume, entire groups would go out of business.”

That could be a price worth paying if it results in a more targeted, responsive and respected industry. There are signs that things are starting to change. For example, the market for generic information compiled from directory sources is virtually saturated. Prices are rock bottom, with some list brokers selling at &£10 per 1,000 names.

Conversely, the premium sector, where data has been segmented, suppressed, tested and analysed, has far more “added value” potential. This, coupled with the increasing sophistication of data-management software, could lead the way to far more interesting and lucrative opportunities. It has never been easier to hold large amounts of customer information in one place. The potential is there for list agencies to offer something more sophisticated than just names.

Successful direct marketing is all about testing. With enough testing, companies will usually get it right. Yet for an industry that attaches so much importance to measurement, there is a surprising lack of benchmarks and quality standards. Many see an industry-backed “stamp of approval” as a way to instil confidence in the quality of the lists and how they are likely to perform.

Consodata managing director Dawn Orr has argued that the introduction of a quality standard is overdue. “Introducing independent list accreditation to provide quality assurances for clients would be a major step forward,” she says.

“The future of the data market lies in list accreditation. This provides clients with assurances about the lists they buy. For example, the Direct Marketing Association (DMA) already produces independent best practice guidelines for the industry. This could also be applied to list accreditation – which would serve the industry as well as its clients.”

A system whereby list owners and brokers worked in conjunction with the DMA to establish a system of accreditation would make the data market less confusing. It would also instil greater confidence, enabling buyers to make decisions based on more transparent, measurable criteria. Who knows, perhaps I might even stop receiving junk mail addressed to a Ms Mimi Morris, who evidently once resided in my flat. According to the neighbours, about 15 years ago…

Now the Diary doesn’t like to pick on people, but as this story is known to several hundred senior marketers already – not all of whom come out with much credit – the harm has probably been done. So, step forward BCC Marketing Services sales executive Matthew Binley. Early last week, a large number of […]

Gillette’s top marketer in the UK Jackie Jordan is to leave the company at the end of this month, following a restructure of the company’s marketing team in February. Jordan, who was business unit director for grooming and personal care at Gillette, says she has another marketing director job to go to, but is refusing […]

Coca-Cola has bought a stake in new US cable TV channel College Sports Television for $10m (£6.4m) and has committed $5m (£3.2m) in advertising and sponsorship to the channel.