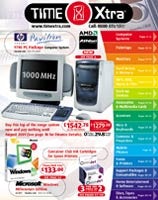 Free was marketing director and a member of the 1996 management buy-out team at Powerhouse. The Time role has been created to help Time Group’s new retail stores achieve a turnover of over £300m – an increase of 50 per cent on current turnover, which is about £200m.

In addition to his nine years at Powerhouse, Free spent eight years at Dixons, working in all areas of the retail business at various levels.

The company, which is in the process of rebranding its Time and Tiny Computers stores as The Computer World, is locked in a legal dispute with Dixons, which claims the name is confusingly similar to its own PC World. Time Group says it is “vigorously defending” the legal action.

Free will report to Time Group managing director Brian Lynn, and will have responsibility for retail logistics, strategy, marketing and sales. Free has prior knowledge of Time Group, having been heavily involved when Time moved into 60 Powerhouse concessions in 1996.

Lynn says the role “will accelerate Time’s move from manufacturer to retailer”.

The rebranding to The Computer World should be largely complete by next month, with 150 stores renamed.