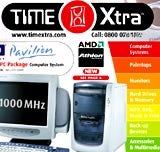 Time Computers is poised to stock other computer brands in a new venture, branded Time Extra, which it is launching to rival PC World.

Time has sealed deals with other major manufacturers, including Hewlett-Packard and Fujitsu, to sell 1,500 products through three major channels.

Time Extra concessions will be rolled out in 200 UK Time Computers stores throughout November. The whole range of products, from PCs to MP3 players, will also be sold at www.timeextra.com (previously powerstore.com) and through 64-page mail order catalogues.

Time marketing director Mike Phillipson says &£2m will be spent on a launch press campaign, with TV ads to follow in the new year. Creative work for Time is handled by HHCL, with media through CIA. The company plans to spend &£30m on marketing over the next year.

Time has also developed a new strapline, “Life technology”, which will be incorporated into future advertising.

Phillipson says: “Customers will be able to get the best products at the lowest prices through Time Extra. We’re positioning Time as bringing technology and living together in harmony.”

Marketers are expecting the strongest sales growth in value since 1995 according to the latest Marketing Trends Survey from the Chartered Institute of Marketing. There has also been a turnaround in marketers’ confidence which has lifted the CIM confidence index to 91.8 – its highest level for five years – indicating that the UK economy […]

Former London adman Geoffrey Sundquist is following up his 1998 festive TV hit, Father Christmas and the Missing Reindeer, with a new animation – Santa’s Special Delivery – featuring the voice of Rick Mayall. Sundquist wrote the story, which will be broadcast on the BBC on Christmas Eve, as he was recovering from a serious […]

New technology, particulary the Internet, means that customers can and will define your brand values for you; following their lead will make you a leader.