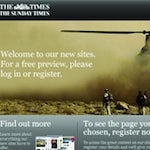 At present, users have to register to access The Times online for free. However, it comes ahead of plans to erect a pay wall, expected soon.

According to a study by Experian Hitwise, The Times market share fell to 2.67% in the week ending 19 June from 4.37% for the week ending 22 May, after the registration process was introduced.

When the pay wall is introduced, users will be charged £1 a day or £2 a week to access content.

The average time spent looking at the site has also dropped from 5 and a half minutes to three minutes per session, Experian Hitwise claims.

The research also shows that a “significant” number of people are opting to register to access The Times online content but adds that the “the test will come when people actually have to pay.”

The data from Hitwise also suggest that The Times’ traditional broadsheet rivals will benefit most from readers when it erects its pay wall. It adds The Independent, The Telegraph and The Guardian picked up the most traffic from users not prepared to register to access The Times content.