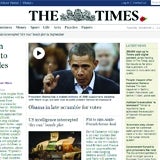 The paper has 105,000 paying digital-only subscribers, as well as a further 100,000 joint print and digital subscriptions.

Around 50,000 of the digital-only subscribers are monthly and include subscribers to the website, iPad app and Kindle edition. The rest are either single copy or pay-as-you go customers.

Zach Leonard, former Times Newspapers digital publisher and current managing director of digital for The Independent and Evening Standard, says News International’s paywall figures were “exciting”, while the level of information and data on the subscribers would be something that other publishers could be “envious” of.

Last week, Nielson released figures suggesting the title had around 362,000 visitors accessing subscriber content. It estimated the number of unique visitors to the site in the three months to September stood at 1.78m, a decline of 42.6% from Q2.

Although The Times has been vocal it isn’t chasing numbers, and is instead building loyalty and engagement. Its average page views per user decreased to six, and dwell time fell to five minutes, according to ComScore.

Despite estimates from online data specialists Nielsen and ComScore, the media industry has been waiting for News International to share official figures as the first indications as to the success of its experiment into paid content online.
“It’s very exciting that News International has invested so much in this radical experiment,” says Leonard.

“All publishers are looking for new models, whether it’s around subscription or advertising. I think most will be envious that News International has a relationship with even 100,000, with such a level of knowledge and depth. Success will be based on what it does with that data. It can’t be judged based only on comparing to advertising models.”

He added, “It will take years to get the mix right between subs, ads and ecommerce. We appreciate News International is resourced well enough to take the risk on behalf of the digital news industry. High-quality journalism is worth paying for through digital channels but it means delivering real value to users in terms of design, multimedia, interactivity, scoops and currency.”