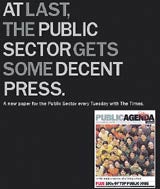 The Times is to launch a weekly supplement for the public sector, in competition with The Guardian’s Society supplement.

The new supplement will be called Public Agenda and appear on a Tuesday, the day before Society. With a pagination of 24 pages, it will be aimed at people working in the public, education, health and not-for-profit sectors and cover news, comment and analysis.

Times Newspapers marketing director Andrew Mullins says: “An increasing number of people are switching from the private sector to the public sector and Public Agenda will keep them informed of developments and issues that are essential to their jobs.”

Public Agenda’s launch will be backed by a poster campaign that includes 48-sheet cross-track sites on London Underground, and press ads in a selection of public sector titles, such as the Local Government Chronicle and Municipal Journal, as well as general business titles such as Management Today. There will also be a national direct mail programme targeting existing and potential Times readers.

The Guardian launched its Society supplement in 1979. A spokeswoman for the newspaper claims that twice as many senior public sector professionals use The Guardian as The Times and Sunday Times combined when looking for a job.