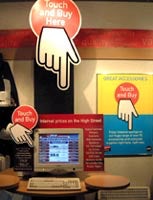 Tiny Computers is doubling its number of UK showrooms and creating 450 jobs as part of a move to capitalise on the difficulties experienced by some of its rivals.

The PC manufacturer has signed a deal to take over 140 concessions in the Powerhouse retail chain, which it claims will make it the UK’s largest PC retailer and add more than &£100m to its annual turnover.

The move comes just two weeks after rival PC maker Time Computers gave up 60 concessions in Powerhouse to concentrate on its own-brand shops. It also follows the withdrawal from the UK earlier this year of US computer firm Gateway, with the loss of more than 1,000 jobs.

“With a number of players encountering serious difficulties recently and closing down outlets, there is scope and opportunity to increase market share,” says Tiny managing director Andrew Walwyn.

Tiny is rebranding its existing 143 showrooms, following a trial at the Oxford Street and Luton stores. The showrooms will get a new colour scheme and logo, and a separate area for digital peripherals.

Marketing director Colin Greene says the company will increase its annual marketing spend – currently &£30m – as a result of the expansion.