The end of an Indian summer, the switching on of the Oxford Street lights and the arrival of Christmas on the Emma Maersk have begun this year’s festive season – and heralded the annual shopping spree.

From now on, chief executives and store managers will be anxiously monitoring till-roll figures day to day. Grocers in particular will be hoping to significantly increase their share of the Christmas market this year, by offering more non-food products than ever before.

Traditionally, grocers have been very strong in a few categories that have a high gifting potential: notably alcoholic drinks, confectionery and flowers. Although these categories still represent nearly 40% in volume of all gifts bought in grocers, non-food categories such as clothing, toys and games, DVDs and electronic goods are becoming increasingly important to their gifting business.

However, grocers still hold only a 7.5% value share of the total gifts market – and more worryingly for store managers, the overall spend is static compared with the previous 12 months. In fact, the average spend per gift bought in grocers remains about £10, compared to £25 on the high street. Grocers already account for a significant share in volume (30%) of the small gift/stocking-filler market (gifts bought for £10 or less) but their main challenge is to get more shoppers splashing out in their stores on their main gifts.

New technology products represent an obvious sector in which grocers could have a significant impact. In the past 12 months consumers spent around £250m on household personal items such as flat-screen TVs, digital radios and MP3 players, making it one of the fastest-growing “gifting” categories. Another sector opportunity is children clothing – at the moment, one in four children’s clothing items bought as a gift is purchased in a grocers. Figures for CDs and DVDs are following the same trend, while in the toys and games category (including electronic games/consoles) grocers have more than doubled their gifting share in the past four years, from 5% to 11%.

Another threat for the high street has been the Web. A significant £2.8bn was spent online on gifts in the past 12 months (up to June 2006), compared to just under £700m in 2001/2002 – showing that the value of the online gifts market has quadrupled in the past four years while the rate of growth in grocers has recently almost come to a standstill. However, a large section of the population are still reluctant to use the internet to buy goods because of perceived risk of fraud.

In addition to this, e-tailers have suffered from some bad press, where consumers have complained about poor customer service. This is a key issue, particularly when people are purchasing items as a gift; they need reassurance that they will easily be able to exchange or return a faulty product within a reasonable time frame, and without hassle.

The profile of those who currently buy gifts online tends to a more male bias, younger and more affluent than any other source of distribution (store, catalogue or telephone). The most popular product categories bought as a gift via the internet are toys and games (15% share in volume), DVDs (14%), books (10%), CDs (9%) and electronic goods (8%).

Christmas is the ideal occasion for online shopping as it allows consumers to browse, compare prices and have gifts delivered (and wrapped in some cases), without having to face the crowds on the high street. The average spend on a gift bought online is £40 – around £15 more than the overall average spend on a gift.

Faced with this fierce competition from grocers and online retailers, specialist stores and high street outlets have had to respond in order to maintain their share – which is more threatened around Christmas time, when 40% of all gifts are purchased.

While grocers have focused on low prices and promotions to increase visitors, especially when selling key products such as games consoles, the high street stores have explored other strategies to stop sales loss. By offering a wider choice of products, placing more emphasis on client servicing and offering strong product guarantee/advice packages (which is particularly important for electronic goods) high street stores have managed to regain the edge on grocers by making the whole retail experience more enjoyable at Christmas time. Having more staff on the shopfloor to avoid long queues at the till, keeping inventory levels high to ensure product availability, and paying attention to “little things” such as free car parking and a gift-wrapping service are all part of what attracts and retains customers.

This Christmas will either confirm that the high street is firmly back on track, or will prove that the past 12 months were just a temporary setback for grocers and online retailers. Either way, it is likely to signify another change of pace in the gifting sector. 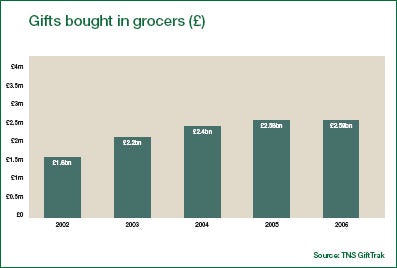 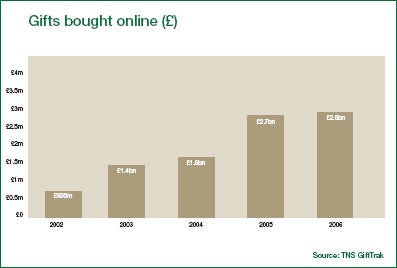 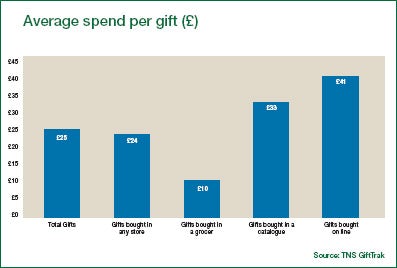 NTL is planning to launch a series of Virgin-branded television channels after its rebrand to Virgin Media next February. In an interview with Marketing Week, NTL managing director of brands Ashley Stockwell says the cable company is looking to …

Ever feel like you’ve been cheated? Well, the Diary does – and with good reason. According to author Graham Edmonds, we are “living and working in the golden age of bullshit” and “being constantly bombarded with lies, fakery and spin”. He exp…