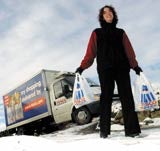 The long-predicted internet shopping revolution appeared to have arrived this Christmas, as record numbers of consumers shunned the high street in favour of shopping online. And according to new research from MORI Financial Services and the Royal Mail, this is a trend that is set to continue as consumers use home shopping more often and for a wider range of products.

The report shows that just under half the British population (44 per cent) claims to have used home shopping in the past year. This is up from 41 per cent in 2001. While books, CDs and clothes are still the most popular items bought through home shopping, other categories are seeing rapid growth. Groceries, for instance, only account for six per cent of home shopping, but this has risen by 50 per cent over the past three years.

Home shopping is more popular with women than men: for instance, 24 per cent of female respondents are likely to buy clothes online, compared with just 12 per cent of men. There are exceptions, however: men are more than twice as likely to buy a computer online. Computers are the fastest-growing category in online shopping with nine per cent of people buying remotely – an increase of 65 per cent from three years ago.

There has been a small increase in the use of the internet for buying tickets: the percentage of people making flights and holiday purchases has risen from seven to 12 since 2001; the proportion making theatre, cinema or concert ticket purchases has risen to ten per cent over the same period. Event tickets are a regular online purchase for consumers: 31 per cent buy them through the Web, up from 18 per cent three years ago.

The keenest remote shoppers are 30- to 34-year-old couples (particularly those with children), who seem to appreciate the convenience of home delivery. The under-30s and the over-60s are least likely to use home shopping, with 63 per cent of under-30s and 62 per cent of under-60s saying they have not bought anything online this year.

The data also links detailed personal finance information with respondents’ home shopping habits. For instance, it shows that the seven per cent of people who have accounts with new financial services providers such as Cahoot, Egg, ING Intelligent Finance and Smile are also serious home shoppers. It shows that 78 per cent of them have used home shopping in the past year, with 19 per cent now doing their grocery shopping remotely (against the six per cent population average). A similar pattern emerges among those with a credit card from the newer issuers, such as Capital One and Morgan Stanley, among whom use of home shopping is ten percentage points higher (at 41 per cent) than among holders of more traditional cards.

Perhaps one of the key changes in home shopping concerns the media through which consumers carry it out. Three years ago, half of all remote shoppers used a traditional catalogue such as Littlewoods or Argos and just 27 per cent used the internet. But since 2001, catalogue shopping has fallen to just 34 per cent while use of the internet has doubled to 57 per cent.

Consumers still have concerns about online security issues, although these have eased over the past three years. In 2001, 28 per cent of the population were not worried about online payments, but this figure has now risen to 38 per cent. The remote bankers clearly do not suffer greatly from such concerns – after all, they are happy to do their banking online. A combination of familiarity with the internet and fewer worries about security means that 90 per cent of respondents who have online banking and use home shopping do so over the internet.

While there has been a significant increase in home shopping, traditional retail outlets still hold sway, with 67 per cent of respondents agreeing that browsing around a shop is preferable to home shopping. Even among the progressive remote bankers, nearly half would rather visit a real shop than buy online. There will undoubtedly be a further rise in home shopping as it offers convenience and, often, good deals – but it seems that consumers still feel that nothing beats that “shop until you drop” feeling.