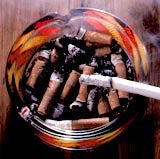 Members of the House of Lords are once again set to disrupt the passage of the Tobacco Advertising and Promotion Bill, with amendments put forward this week.

Three members are proposing a clause which would see the Private Member’s Bill scrapped after six years, unless it is deemed to have reduced smoking levels over that time. The Secretary of State would assess the impact of the Bill at this time.

The same clause led to the collapse of the Government’s own tobacco advertising Bill in the last Parliamentary session, after the Conservatives refused to give way on the issue and the Bill ran out of time.

John Connolly, public affairs manager for campaigning group Action on Smoking and Health, says if the clause were included it would leave the Bill open to abuse.

He says: “Advertising is not the only thing that affects consumption. Companies could cut their prices to make sure consumption stays high.”

Tobacco Manufacturers’ Association director of public affairs John Carlisle says: “We believe this matter is best dealt with by the Government, rather than through a Private Member’s Bill.”

The Government has argued that a ban on tobacco advertising would save 3,000 lives per year, although the Lords argued earlier this year that more research needs to be done.