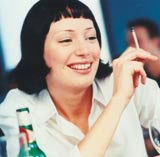 It has been an uphill struggle for tobacco manufacturers since the ban on advertising their products was introduced in 2003. But that has not put off some manufacturers from launching new variants and brands.

Last week, for instance, Philip Morris unveiled a new Marlboro variant called Blend 28, the first Marlboro brand extension since 2000. Philip Morris has also just tested a smoke-free “electronically heated smoking system” in the UK (MW last week), on the grounds that the development of “safer” products is one way for tobacco manufacturers to tackle health issues, gain market share and create a healthier corporate image. Senior vice-president of corporate affairs David Davies admitted at a conference in Australia last month that the company is busy developing products with the “potential to reduce harm”.

All forms of traditional advertising have now been phased out in the UK, as have more indirect routes, including the advertising of branded clothing lines such as Marlboro Classic and, from July (subject to last-minute legal challenges), sponsorship. So Philip Morris is theoretically left with only a “trade information programme”, trade press advertising and A5 gantry advertising to promote its new product.

The industry has been here before. When television advertising was banned in the UK, the tobacco industry moved into sports sponsorship and when images of smokers were forbidden, ingenious abstract campaigns such as those for Silk Cut were devised.

But the challenge is greater now, with companies forced to admit that cigarettes are bad for people, placing larger and more graphic health warnings on packs, while at the same time jockeying for sales in a shrinking market. And it is only going to get harder with smoking restrictions planned for public places over the next three years.

And even if “safer” products are brought to market, it will remain extremely difficult to communicate their benefits to smokers under current regulatory restrictions.

Imperial Tobacco head of consumer marketing Peter Manzi says that although his company is not developing “safer” cigarettes, the regulations could undermine the work of those that are: “It is a huge problem for the companies developing them. If ever there was a safer cigarette, how would you be able to tell consumers?”

He believes the current legislation is comprehensive and effectively bans any marketing activity that works.

But Amanda Sandford, research manager of anti-smoking group Action on Smoking and Health (ASH), says that the industry will not “go away quietly, but will try to find new ways of promoting brands”, whatever the restrictions. “That is why the legislation against it needs to be as comprehensive as possible,” she adds.

Sandford speaks of several “grey areas” in the current legislation, including ruses such as sponsoring events in countries where it remains legal to do so in the knowledge that exposure will be given in the UK through media coverage. She also claims that some tobacco companies have continued to advertise in the overseas editions of English newspapers in countries with more liberal regimes, such as Spain.

Then there is the internet. British American Tobacco, for instance, runs a website that promotes nightclubs in Belgium, on the proviso that the clubs stock its products. BAT says the site will be closing soon.

As for sponsorship, Sandford says that holding companies can still get involved. There is nothing to prevent BAT or Philip Morris, for instance, from taking over the sponsorship deals of their brands. With the complex web of distribution and marketing deals relating to brands in different countries, however, the benefits of such a strategy are debatable.

Teresa La Thangue, a spokeswoman for BAT, which has not launched any brands since the advertising restrictions came into force, describes the situation as a “nightmare” for new product launches. She also adds: ” It is causing our in-house teams to be very creative in terms of promotions.”

With traditional advertising out of bounds, companies are now heavily reliant on brand loyalty. BAT has tried to increase sales and encourage loyalty by securing exclusive distribution deals for its brands in targeted bars. The trendy Dust Bar in East London, for instance, only sells BAT’s Lucky Strike cigarettes over the bar.

This strategy is not an option for all companies. Imperial and Gallaher have so much of the UK market that they are forbidden from entering into exclusive distribution deals by the Office of Fair Trading, on competition grounds.

Philip Morris corporate affairs manager Chris Mohrmann says: “Packaging has become much more important to all manufacturers, which are trying to get adult smokers to change brands in the environment we have.”

She says that the new Philip Morris brand, Blend 28, retains the distinctive Marlboro imagery in order to help gain recognition.

Manzi says that even packaging has limitations. People wear their chosen brand like a badge, he explains, and it needs to convey an image. A gaudy packet might attract interest behind the counter, he argues, but it won’t appeal so much when the smoker has to produce it in front of their friends in the pub.

Nick Mustoe, chief executive of ad agency Mustoes, which used to work for Imperial, believes that little marketing activity can be done in the current environment. He says the death-knell was sounded when in-pack promotions were banned and point-of-purchase activity was reduced in December to a single A5 sheet per shop. From now on, he believes, the market will be driven by price-led brands, with a small group of premium brands existing alongside.

One of the few ways left to push brands, says Interbrand chief operating officer John Allert, is through informal associations with celebrities. “People will associate the brand with their aspirations,” he says.

Despite the existence of ways round the existing legislation, Sandford hints that ASH might not oppose a further relaxation of the rules, to allow the marketing of “safer” products that would help people to quit smoking.

And the tobacco industry might not have to wait for such a product to come to market. The German government is appealing against EU restrictions on advertising and a result is expected later this month.

Although it is supposed to have been stubbed out, there are signs that reports of the death of tobacco marketing have, once again, been exaggerated.

David Benady is absolutely right in saying that sponsorship is not “simply sticking a brand on a few banners at an event and hoping the audience notices” (MW March 24). While making resources available to promote a sponsorship in an innovative way is essential, it is also imperative that companies look on the event-provider as […]

COI Communications has shortlisted Carat and incumbent Starcom MediaVest in the final stage of a pitch to handle its &£75m TV media planning and buying business, after ruling out MediaCom and Zenith Optimedia.

Your report and leader on the Office of Fair Trading (OFT) investigation into supermarket practices (MW last week) made one thing very clear: trade investments in one form or another are here to stay. Suppliers are reconciled to this fact; the question for them is how to ensure that they achieve the best return on […]