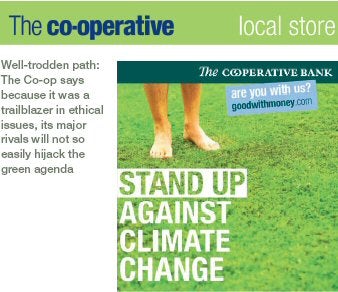 The Co-operative Group is probably best known for its neighbourhood food stores, and branding experts feel it has an outdated image that fails to draw in younger shoppers. But it has set out to prove with a recent rebranding exercise that there is more to the Co-op than just top-up shops in sleepy Northern towns.

The group is the biggest co-operative retailer in the UK, comprising food, travel, pharmacy, funeral and financial services. It was recently voted the country’s most trusted brand among consumers and has become the first high street retailer to offer “carbon offset” flights (MW last week), further building the chain’s green credentials that came to prominence when it backed the Fairtrade movement.

Furthermore, the retailer has relaunched its profit-sharing scheme, affectionately known as the “divi”, enabling anyone to become a member for 1. It also recently announced a 32% rise in first-half profits, with turnover hitting 4bn.

Despite having a tiny share of the UK grocery market (TNS Worldpanel calculates “total Co-ops” as having a 4.5% share for the 12 weeks to September 10), The Co-operative’s group marketing director Zoe Morgan is keen to stress it will stick to its guns. “We have to keep the pressure up on things we are famous for,” she says. “For example, we have a reputation in Fairtrade and it’s an area we want to keep leadership in.”

The group’s major rivals such as Asda, Tesco and Marks & Spencer have all jumped on the green bandwagon in recent months, but Morgan is not fazed by the publicity that others’ initiatives, such as recyclable carrier bags and timber-only stores, have garnered.

“Supermarkets do now have a similar agenda to us and a greater share of voice to shout with,” she states. “There is a momentary twinge when the likes of M&S make the front pages, but it’s not unhelpful because it improves consumer awareness and makes everyone here raise their game. I believe we have the most authentic and trusted offering because we’ve been doing it for nearly 150 years.”

Despite this claim, retail experts believe the brand overhaul has not come soon enough. Robert Pyrah, a consultant at Origin Brand Consultants, says The Co-op has a “clear brand promise” of ethical principles and mutual ownership. But he adds: “The inconsistency of communications across its many divisions has led to a blurring of perceptions.

“Some of the gains in public perception made by the banking division have not translated automatically to the foods division. Foremost among the reasons for this is the weak brand linkage and internal lack of consistency, even down to the differing logos and signage on stores.”

This is an issue that Morgan believes the new, unified identity is already tackling, while 37m is being spent this year alone on food store facelifts. She says: “We have already improved our corporate reputation. There is also much more awareness in terms of customer understanding that we have more than one business. Many vaguely knew the food stores or bank but not necessarily that we were in other markets.”

Mike Godliman, a director at retail and marketing consultancy Pragma, adds: “The good thing is the stores have a lot of untapped potential. Rebranding is a very positive step.

“In some ways the market is moving towards what the Co-op stands for. A lot of people want organic, healthy food and others want to support retailers that share their profits, like John Lewis. The ground is shifting back towards the Co-op’s original ethos, but it needs to make sure it has the stores to support that.”

Morgan, who joined the group in 2004 from HBOS, dispels the myth that Co-ops are the haunt of old ladies with shopping trolleys. She says: “In terms of who shops with us we’re absolutely a representation of the population. People who are younger may shop with us for convenience rather than reputation, but the financial services side is particularly effective for recruiting younger people buying into our social ideals.

“We benchmark our standards against our competitors’, such as Boots for pharmacy or Tesco Express for food, and try to offer at least as good an experience and products. We are also investing in product ideas, such as the carbon offset flights and eco-insurance at the bank.”

With a new healthy living sub-brand promised for the new year, and the prospect of the Travelcare business’s website overtaking its high street stores for holiday sales within two years, Morgan confidently claims The Co-operative Group is finally shedding its stuffy image.