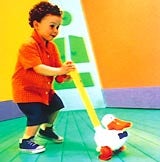 Tomy Group has appointed Eric Rossi to the newly created post of president of Tomy Europe. He will have responsibility for marketing the Japanese toy brand across the continent.

Tomy Europe is a new division set up to help the company realise its three-year plan to become one of Europe’s leading toy manufacturers.

Rossi, who was previously managing director of Tomy France, will be responsible for defining Tomy Europe’s expansion strategy and overseeing product marketing, brand management and communications to build the company’s core brands.

Alan Munn, president of Tomy UK, has been promoted to the new position of chairman and chief executive of Tomy Europe.

“Tomy is very strong in the UK and France. Centralising the European group will allow us to develop the brand in other markets, such as Spain and Italy,” says Munn.

He says it is too early to speculate whether Rossi will review Tomy’s European advertising agencies, adding: “We are always reviewing the effectiveness of our communications. It is too early to say whether there will be any changes.”

Tomy is the biggest seller of pre-school toys in the UK. As well as its toy range, which includes Thomas the Tank Engine train sets, Mega-Sketcher and Tumblin’ Monkeys, it makes baby monitors and baby carriers.