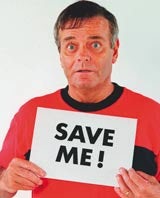 Viewers of last summer’s “reality” hit, I’m a Celebrity… Get Me Out of Here, will remember how veteran DJ and eventual winner Tony Blackburn scorned fellow vegetarian Uri Geller for having principles as flexible as his cutlery. Geller’s crime was to agree to eat various insects and grubs in order to win food for the rest of the group.

The Diary wonders what Geller makes of Blackburn’s new breakfast radio show, which launched on UBC Media-owned Classic Gold Digital this week. The show is sponsored by Danish Bacon, and although the Diary is aware that foreigners do things differently, it is willing to bet that the Danes don’t pick their rashers from trees. The fact that Blackburn hasn’t had a regular weekday national radio show for about 30 years is, obviously, irrelevant to his accepting the deal.