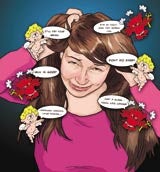 The constant stream of contradictory messages and instructions barked out daily through the media, advertising and public awareness campaigns is enough to give the average person a tense, nervous headache that even a strong dose of aspirin will not cure.

From mobile phones and milk, through driving too fast to carbohydrate intake, consumers are assailed on all sides by the partial messages of government organisations, non- government bodies, brand owners and market opportunists.

Last week it was the turn of mobile phone users – once again – to feel a tingle of fear as they heard of the potential dangers of tumour-causing radiation emitted by their phones. National Radiological Protection Board chairman Sir William Stewart told a press conference that children under nine years old should not use mobile phones because their skulls are not fully thickened and the radiation could penetrate into their brains when they hold the handsets to their ears.

Stewart was launching the NRPB’s report on mobile phones and health when he made the comments, though the report itself concluded “there is no hard evidence at present that the health of the public in general is being affected adversely by the use of mobile phone technologies”. It says that “uncertainties remain” and recommends a “precautionary” approach to their use until the situation is clarified. This repeats the advice given by an NRPB report published five years ago. The fact that no successful legal case has been brought against mobile phone manufacturers for damaging health effects reflects the lack of hard evidence against them.

The NRPB is sending out mixed messages, reflecting the uncertainty of its findings. Stewart said that he could see no good reason why under-nines should have a mobile phone, given the potential dangers, but he accepted that parents of nine- to 14-year-old children may wish to let them carry a phone for safety reasons. With more developed skulls, their brains would be better protected against potentially harmful radiation. But the decision on whether to let these older children carry a mobile is a “judgement parents have to make” he said – effectively telling parents to weigh up the harmful effects of radiation on their children’s brains (of which they probably understand very little) against the child’s personal safety on Britain’s apparently dangerous streets.

This sounds like scary stuff, and as always, marketers are on hand to cash in on these fears.

After Stewart’s first report in 2000, which suggested that “hands free” sets reduced the risk of radiation affecting the brain by 50 per cent, many people began to use the sets more frequently. But this ebbed away within six months as the fears raised in the report faded. This has not been the only recent opportunity for a short-term uplift in sales of protective equipment, as purveyors of gas masks discovered after the September 11 attacks, when the Government said a terrorist attack in the UK was a question of “when, and not if” and raised the possibility of gas attacks on the London Underground.

However, the dangers of fear-based marketing were highlighted last week when MyMo, the first mobile phone designed for children, which was marketed to parents as a safety aid, was withdrawn from the market in the light of Sir William’s comments.

Even so, MindShare managing partner Dean Weller believes the dangers highlighted by Stewart provide an opportunity for marketers. If children are to carry mobile phones for safety reasons, but use them for making calls only in emergencies, they can be targeted with more entertaining forms of text messaging. “This should result in more market opportunities for texting,” says Weller. “There’s a chance to make a virtue out of a problem and mobile phone companies should make texting more enjoyable with better games,” he adds.

Part of the confusion for consumers is in the application of the “precautionary principle”, much loved by consumer campaigners, which puts the burden on the promoters of new technologies to prove they are safe, rather than waiting for evidence to show they are dangerous. This approach is what destroyed the use of genetically modified organisms in food, despite a lack of convincing evidence of their dangers. However, in retrospect, if the precautionary principle had been applied to smoking, millions of people might have avoided developing lung cancer. If it had been applied to motorised vehicles, perhaps thousands of lives would be saved each year from road accidents.

But Michael Willmott, director and co-founder of trend analysts The Future Foundation, says: “The precautionary principle is a very dangerous proposal, it stops you doing anything and everything. It says that you shouldn’t undertake any new innovation. You can’t prove something isn’t harmful; science is based on positively proving things.”

In the case of Stewart’s comments about mobiles, he says: “What is amazing about this one, is that there is no harder evidence.”

Even so, he thinks some marketers do not take sufficient precautions. He accuses food marketers of being short-sighted by allowing themselves to be carried along by short-term trends based on unsubstantiated evidence.

Too little, too late

Heinz and Unilever found sales were being damaged by the effects of people adopting the anti-carbohydrate Atkins Diet, with Unilever’s Slim-Fast brand suffering in particular. Both attempted to cash in on the trend and launch their own low-carb products, but found that the Atkins craze had died down substantially by the time their low-carb products were launched.

A similar case in point is the confectionery and soft drinks sectors. In the Seventies, producers of chocolate and soft drinks were committed to increasing their sales by up to ten per cent every year. They did not consider that this would mean consumers doubling their consumption of these products every ten years, with the resultant obesity problems.

“I don’t think companies are very good at thinking things through and recognising that they bear a responsibility,” says Willmott. “McDonald’s thought it could just sell more and more hamburgers.”

In a world where people have come to doubt the credibility of so many government and health messages, marketers rely on emotional rather than rational appeals.

The new Think! road safety campaign launched last week features an eight-year-old girl being knocked down, then getting up to explain the injuries she sustains from the impact of a car driving at 40mph, in which she dies, and 30mph, in which she survives. The Department for Transport (DfT) says the ads attempt to combat what research shows is a widespread public perception that speeding is acceptable.

Road safety campaigners have long blamed the glamorous images of speeding shown in car advertising for promoting the acceptability of driving at speed. Now they are using the same advertising medium to combat these views. The power of the ad seems to come from the disturbing, ghostly image of the little girl talking to viewers after she has been killed. But the DfT claims the campaign treads a careful line between the shocking and the rational. “The responses from research identified the need to combine the emotional with the rational in order to avoid only a short-term ‘tear-jerk’ effect. The advertisement has been designed specifically to marry up the emotional versus the rational aspects to target the 70 per cent of the population who speed,” says a DfT statement.

Healthy eating is an area where many confusing and contradictory messages have been put out in recent years. The Milk Development Council (MDC) has announced that it is hitting back at what it claims is confusion over the health benefits of milk. It is planning to launch a &£3m ad campaign created by Iris aimed at teenage girls, telling them of the health benefits of milk, cheese and yoghurt (MW last week).

The MDC has received &£1.5m from the European Commission through the Rural Payments Agency to match its own funding of the campaign. The RPA grants are available to promote different foodstuffs on the condition that they talk up the health benefits of the food.

Before it can develop the campaign, the MDC first has to persuade the Food Standards Agency to back its position that teenage girls are endangering their health by not consuming sufficient dairy products. The FSA says it will consider the claims along with the dairy industry’s argument that people should consume three servings of dairy products a day. The MDC’s claims about the health benefits of milk products go against the commonly held belief that they are high in fat and cholesterol and should thus be avoided or consumed in reduced quantities. An MDC survey showed that 74 per cent of teenage girls avoid dairy products, which the organisation blames on a lack of knowledge and a “misconception” that dairy products contain high levels of fat.

However, the idea that this is a “misconception” seems confusing in itself given that cheese can contain 35 per cent fat. But MDC marketing manager Vicky Hathaway says that, as people only tend to eat small portions of cheese, it is wrong to conclude that dairy products are high in fat.

She adds that girls and their mothers are confused about their diets. “What we found was that what influences teenage girls is celebrity-driven diets such as the Atkins Diet. Our job is to educate them about the benefits of dairy products and how they can help them feel better,” she says.

An MDC public relations campaign will point out the dangers to women of developing osteoporosis if they restrict their calcium intake by eating fewer dairy products. But people may conclude that the MDC is being opportunist in its claims, given that it is not an independent body and its aim is to promote sales of dairy products.

Much will depend on the form taken by the campaign as to whether it clarifies or confuses matters further. These days, consumers will often opt for the messages they want to hear, only sifting through the evidence where it is of particular interest. The danger is that the sheer number of health, safety and marketing messages being put out means the most important ones will be drowned out.